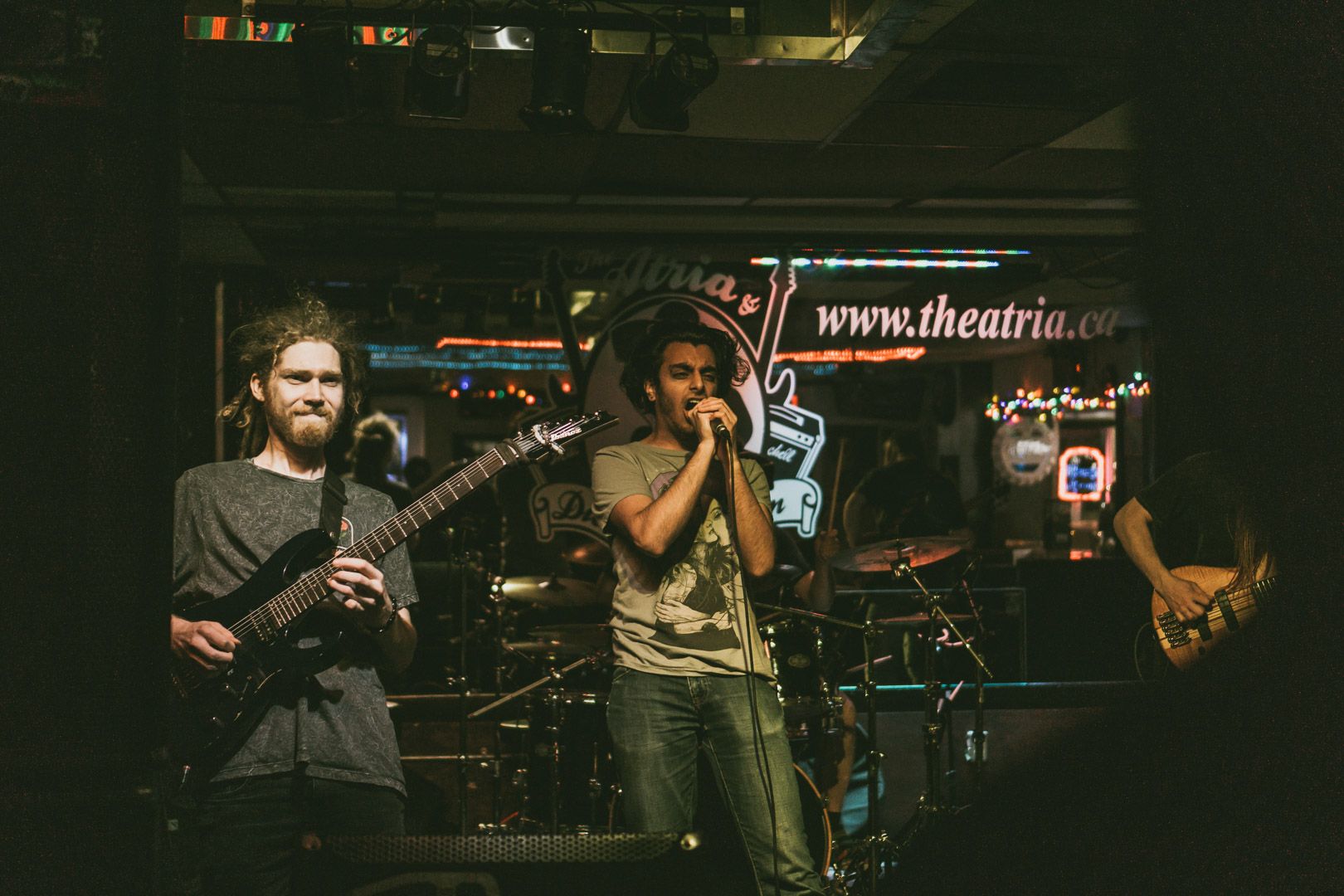 A while back I was reviewing a punk rock band in the Junction and Mark Wylie was one of the people playing that evening. He was doing his own thing with a guitar that really caught my ear. I spoke with him and he told me he was in a Hard core Metal band. I asked him to stay in touch so one day I can check this band out. Since we are chained to our computer these days I thought this would be a good way to still promote great up and coming music. What you are about to read is from the band Mark is in and they are called Maitreya. I tried to include as many ways to learn about this band, that  will be making their mark when we get to see live music again.

BT -When did you form?
Mark –  We played our first show early 2016, so Maitreya formed during Summer/Fall of 2015. The rhythm section existed (Matt McCabe, Lyam Morrison, Steve McMillian) dating back to our highschool days circa 2011. We functioned as an instrumental project named Cadences, which became Maitreya when we met our vocalist (Matt Cutrara).

BT – How did you come up with your name?
Mark – I think we all agreed on Maitreya because of the general philosophical contributions we were all contributing to the lyric process for the first album while the project was still nameless. I remember us having discussions on metaphysical concepts, spirituality, mysticism and science fiction, so when I came across the concept of Maitreya (translates roughly to ‘future buddha’), we all felt this name could embody the lore we were creating.

BT – Where do you see yourselves 5 years from now?
Mark – Hopefully still doing what we are doing now; writing and producing new music and performing shows (assuming the post-COVID live-music landscape will recover). In 5 years time, it’d be cool to see the scale of everything we are doing expand, but if not that’s cool too.

Matt C – Hopefully 3-4 albums deeper into our career!
BT – What is your favourite place to play?
Mark – The Atria in Oshawa has been our home base. A lot of venues have come and gone in Oshawa but the community at the Atria has never let us down.
Matt C – So far sneaky dee’s has been the most fun shows in terms of crowd reception and overall venue vibe.
Lyam – Sneaky Dee’s is a great place to play.

BT – Musically, how are you growing?
Matt C – I’ve been listening to alot more funk, disco, neo soul, and electronic music lately.
Lyam: Taking influences from outside genres more to develop our sound.

BT – If you could, what Toronto venue do you want to play in?
Mark – The Opera House
Matt C – Playing a venue like the Phoenix or Opera House would be cool, but playing the Rebel stage would be very cathartic since my first ever concert was at that venue.

BT – Who would you love opening for?
Matt C – Any of the above influences would make me die happy.
Lyam – The contortionist would be a dream for us, or really any of the higher level prog metal bands.

BT – Best or worst performance you had:
Mark – We’ve had our share of bad performances aha! Notable fails include a ‘festival’ show that ran behind and we crammed our set into about 15 minutes starting after 1:30am, our line check sucked and we never got a good sounding live mix. Or a Hamilton show we drove out for and there was a power outage so we couldn’t perform. Hard to pick a best performance, as long as the mix is good and we play tight it falls under the ‘best performance’ category.
Lyam – We had the opportunity to open for Arkona, a russian black metal band, that’s probably my favourite show we’ve played.

BT – What instruments do you own?
Mark: For guitars & bass, we all use Ibanez Guitars & Line 6 gear for amp modeling and effects.

BT – Are you recording in a studio, if Yes which one?
Mark – We do most of our recording in house, I have a home studio set up in my basement where we recorded/engineered everything for our first album. From there we send out final tracks for mix/master. For the new album we’re working on, we teamed up with Tyler Williams (Monolithic Productions) to take care of drum production as well as the mixing/mastering.

BT – Favourite Canadian group or artist:
Mark – Protest the hero was a major influence, especially seeing their trajectory and them being from our hometown. More recently I’ve been enjoying the stuff Devin Townsend has been putting out.

Here are a few images of Maitreya:

Maitreya is working on their sophomore record and have added a few YouTube links to give you a better idea of who these guys are. Click the links and leave your thoughts with this band.

Learn more about Maitreya with these links.