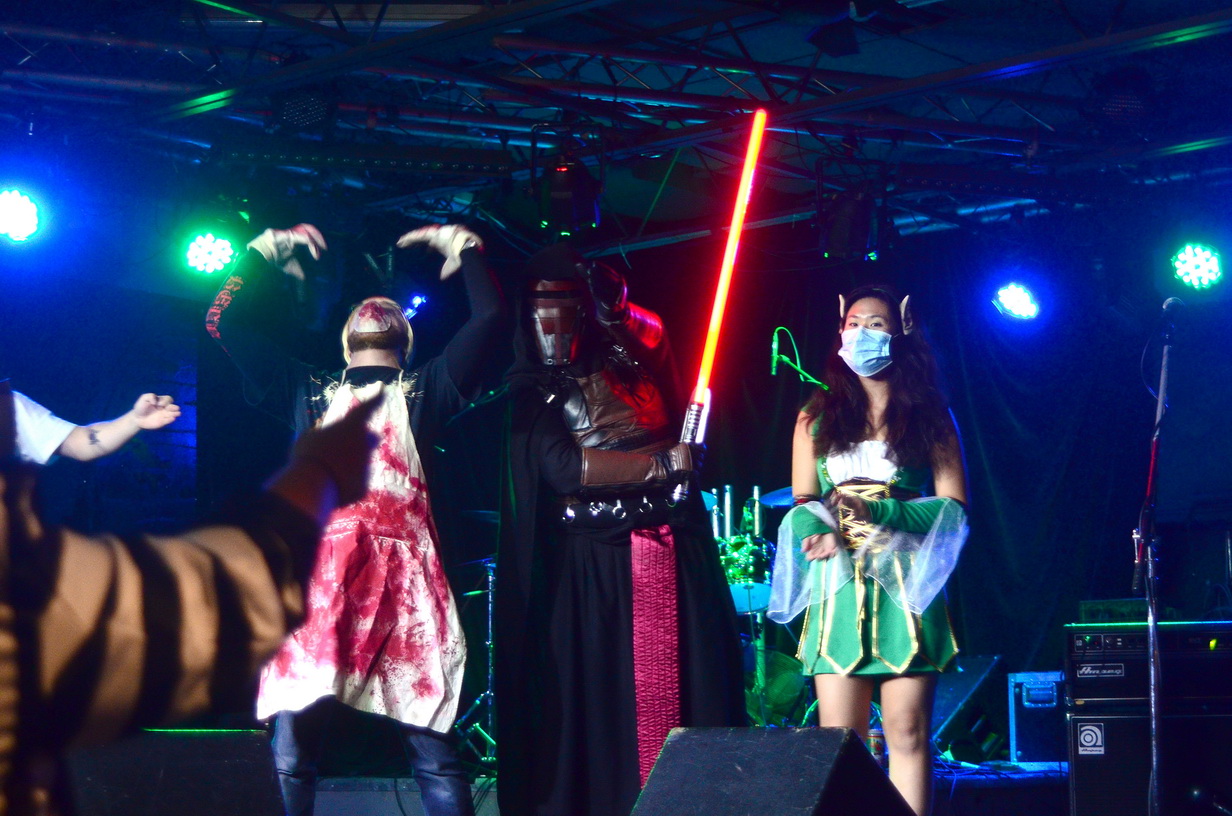 Neurotic Entertainment hosted the Halloween Haunt at the Rockpile this year with 3 very distinct bands. As costumed guests arrived to receive their treat, the Rockpile was ready to deliver. The first to climb the gloomy stage was a Toronto favourite called Axminister. They have been entertaining the metal scene for a while now, and they did not disappoint this evening. They opened with a drunken stoner song called Babylon that slipped into carnivorous song, Wolves of Constantinople. Their storytelling comes from legends of their demented mind as they seem to try and raise invisible goblets of tales to many great people they love to sing about. We had a song of the Great Vlad the Impaler parts 1 & 2. Apparently, he drank blood, but not because it was kinky. They also praised Arnold the Govenator with a Heavy metal Oompapa sound. Axminister is a band you have to take with a grain of salt or a least a few drops of Maple syrup.

Here are some images of Axminister:

Next to grace the stage was a loud visceral band called, Sequential Fear Tremors. If you love those guttural sounds, this is a band that should be on your to-do list! What I loved most about this band was the fact that, like any good Metal Band, everything is on the table for a great song. Well, SFT has a song about the experience of getting a vasectomy. How’s that for Metal?  They finished their original set of music with a classic cover of a Morbid Angel song, Dawn of the Angry.

Here are some images of Sequential Fear Tremors:

The evening didn’t stop there. The Rockpile had to have a Contest for the best costume and some dude dressed up as a Star Wars character won. Sorry, I do not follow Star wars so I have no idea who this character was. Please leave his name in the comment section below.

Finishes the evening out was a very unique band called Hounskull. I was waiting for some kind of European Viking metal sound, which there was some of, but I found their style all over the Metal map. They started with a Halloween song, and then began drifting into something completely different. Most of their sounds were born out of some long jams. Although there were songs with lyrics, I was more fascinated with these long sessions. There were great moments of space rock, that could turn into some very unsettling vibes. You could get some monstrous mayhem moments that could lead into some very inspirational moments. They got very thrashy sometimes and then go to epic-sounding monumental energy that could pull you down into some doom and gloomy feelings. Although their sound was a little all over the map, these guys are a diamond in the rough. Give them time to jam it out some more and you will see this band rise to a cool level of respect in the metal community.

Here are some images of Hounskull:

Overall, a fun Halloween evening of monster music to satisfy every ghoul and guy in the club and make sure you keep coming back for more because the Rockpile does bring in quality metal music, all thanks to Neurotic Entertainment.

← Halloween Warm-Up
Mute Sounds has a Voice and it Soars! →