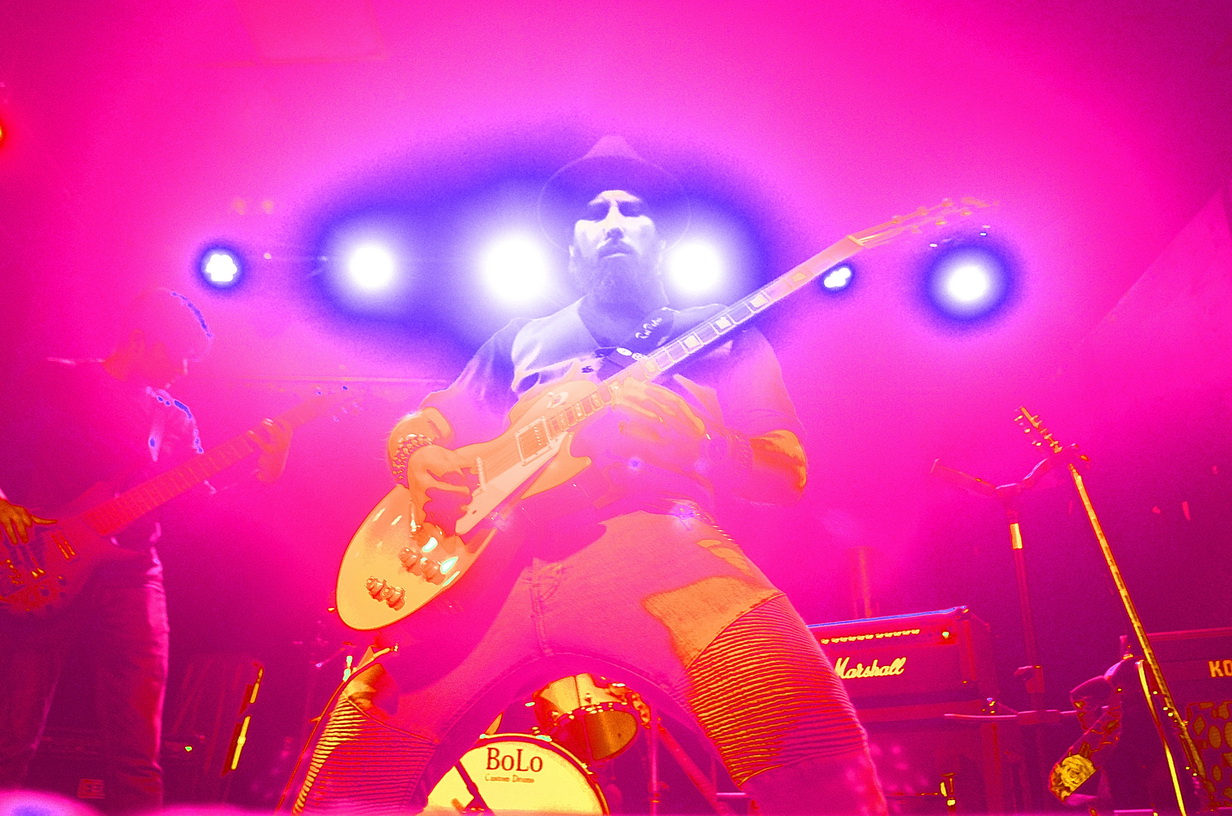 I am going to start this review off the same way they started with their concert. Five years ago the singer, Rui Pedro had throat cancer and had to have an operation. The operation was successful but Rui lost his voice to the disease. This did not deter him to write music that would tell a story. Mute Sounds was created to initiate joyful noise that would fill a room with imagination. Rui turned inward and let his guitar playing be his new voice. The band is fully instrumental. There are 4 members who stay in a sea of calm as they hold together the storm whose name is Rui Pedro. Together they construct wonderful stories with the tools they own.

Within minutes I understood this amazing sound. It is highly organized. It is extremely engaging. But most importantly, it is soulfully Emotive! They started their set with a song called Glorious and you knew you were inside something special. They could slip you inside a dream-like state and invoke your imagination. “Imagination”, was the second song. The imagery of their sound is quite theatric if you just stay open to the nuances of their music. “It’s a Mystery”, does just that. It is a veiled sound of beauty that hides in plain sight; you just need to open up to the story. It literally holds you until the very last note.

There is a story of an ex-girlfriend that is steamy and intense that dance within a sense of confusion and sorrow.. Another one where there is a solid wall of Rock in the flight of fancy, and another of losing a close one, that runs the gambit of anger, angst, anguish and finally the moment of letting go.

There are a thousand ways to describe this band, so I will just leave you with this one… It is like you got hit hard( with almost anything you can imagine), you are lying on a stretcher and they drug you up so you are left alone with time to contemplate the complications of your life, and then finding yourself in complete joy of self-discovery.

Here are some images of Mute Sounds:

If that didn’t sound too shabby, they had an opening band named, Everything but the Rain. This band comes off like a solid wall of sound with a lot of weird and unusual breaks. They can clearly do some straight forward Rock Music and venture in Metal and even some Progressive moments. It is like they have a highly attuned façade that phases through a distorted desolating discipline and crashes that vehicle right in front of you like a bike rider with a slight brain injury.

The singer complained that his voice was quite harsh, but it did not slow down the enthusiasm of the crowd at Lee’s Palace. The band clearly was in a great mood and having a lot of fun on stage with a slightly demented tongue-in-cheek attitude. By the time they were done, the crowd did not let them go. All they had left was a Bass and Drum solo that they jammed out for the next couple of minutes.

Here are some images of Everything But The Rain:

Get more info on Mute Sounds at https://www.mutesoundsmusic.com/?fbclid=IwAR167vo67FGlGOs34ISDn3pQrzG9mbehDWnZ5M4GRFul3szdtecqmhIiMhQ

← Trick or Treating at the Rockpile
The Sun Rises on Solarus again! →