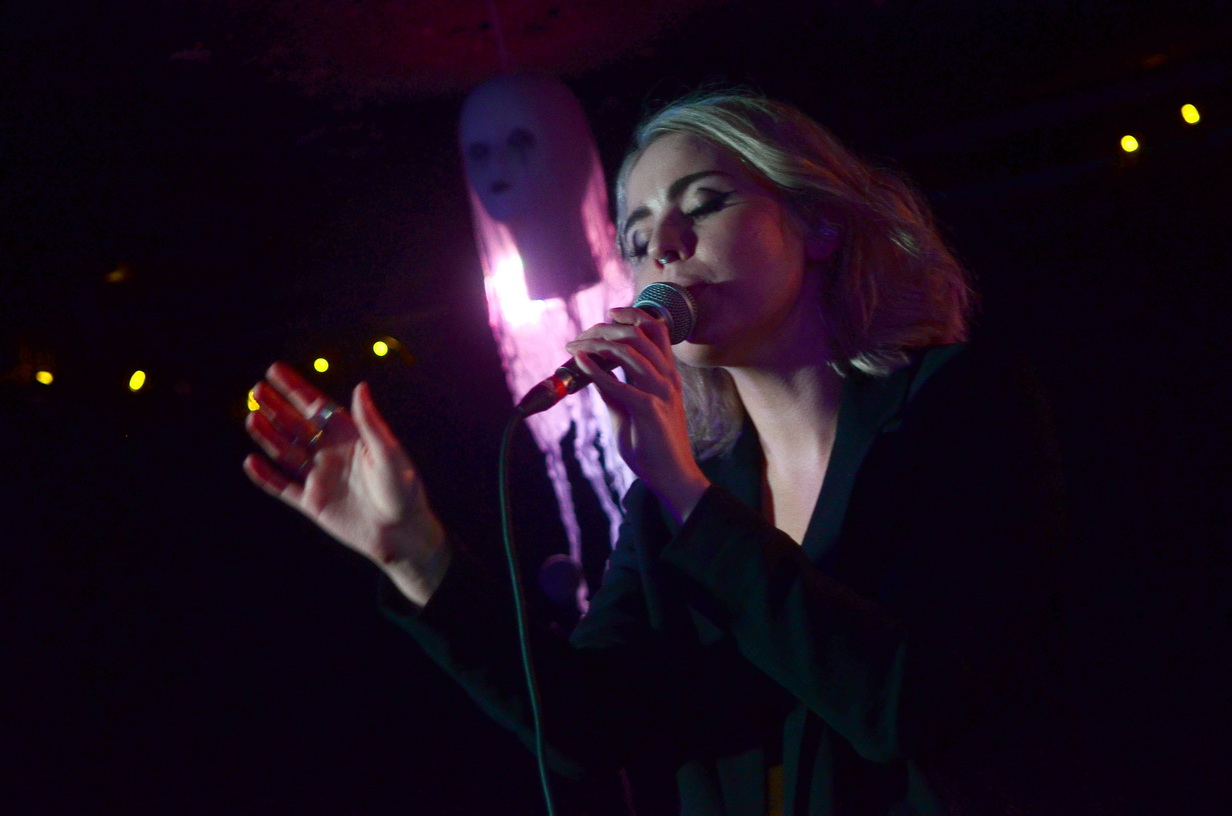 Save Toronto Music Venues leant a hand to present 3 very distinct and original acts at Sneaky Dee’s. They all showed up with their pre-Halloween gear on and had fun with the sold out show. First we had a two piece band called Mandolynne. Their sound started off a little bit haunting but sultry at the same time. They could slip into many different moods flawlessly like a roller coaster heading for a beautiful breakdown. There were moments of complete starkness that could slide into a sludgy cerebral moment and drift through sensual idealisms that leave you a little breathless. I remember the song “Hands”, as it was a full sound coming from a dark basement with epic movements for just one person to hear. There were moments of pain and moments of empowerment. This band can give you the full emotional treatment and then leave you waiting for the next invitation.

Here are a few images of Mandolynne:

Queens and Kings, not Kings and Queens hit the stage next looking like a gaudy pair from the movie Blade Runner. They introduced themselves as a pure trashy band that would hit and thrash you about, but you would still ask for more. They were as trashy as a hung-over Christmas tree.  They were as blonde as a surplus mannequin. They were fast as a shark with baby teeth, but still deadly. They were a rabid as a squeaky mouse choking on old cheese. This is a band that would satiate the audience with enough scouring to choke upon and still the stomach would grumble. By the way, wait until you see the guitarist play his guitar and drum at the same time…Good times!

Here are a few images of Queens and Kings:

To wrap up our pre-Halloween party, Neon Bloom got on the stage with their bouncing bubbly brooding energy, even though the singer had hurt her leg earlier. The singer had an intense squeaky wheel of a voice that completely brought me back to a time when punk rock was marrying into the new wave sound. She kind of reminded me of an early version of Toyah meets Siouxsie and the Banshees. There were moments were she looked like a disenchanted dark host but has the gift of engagement. The entire band brought a sense of stamina that resembled a bunch of fun sociopaths hopped up on Red Bull. The song “Saturday Night”, brought in some classic disco/new wave energy, while “Wild”, was simply wild. There was even a classic drum solo to fill the crowds taste, as it slipped in a tune that felt like a U2 disco song.

Here are a few images of Neon Bloom:

This was the kind of evening Toronto has been thirsty for. And we Drank!

Here are some links you may be interested in.

← Tuned In and Drop Out
Trick or Treating at the Rockpile →