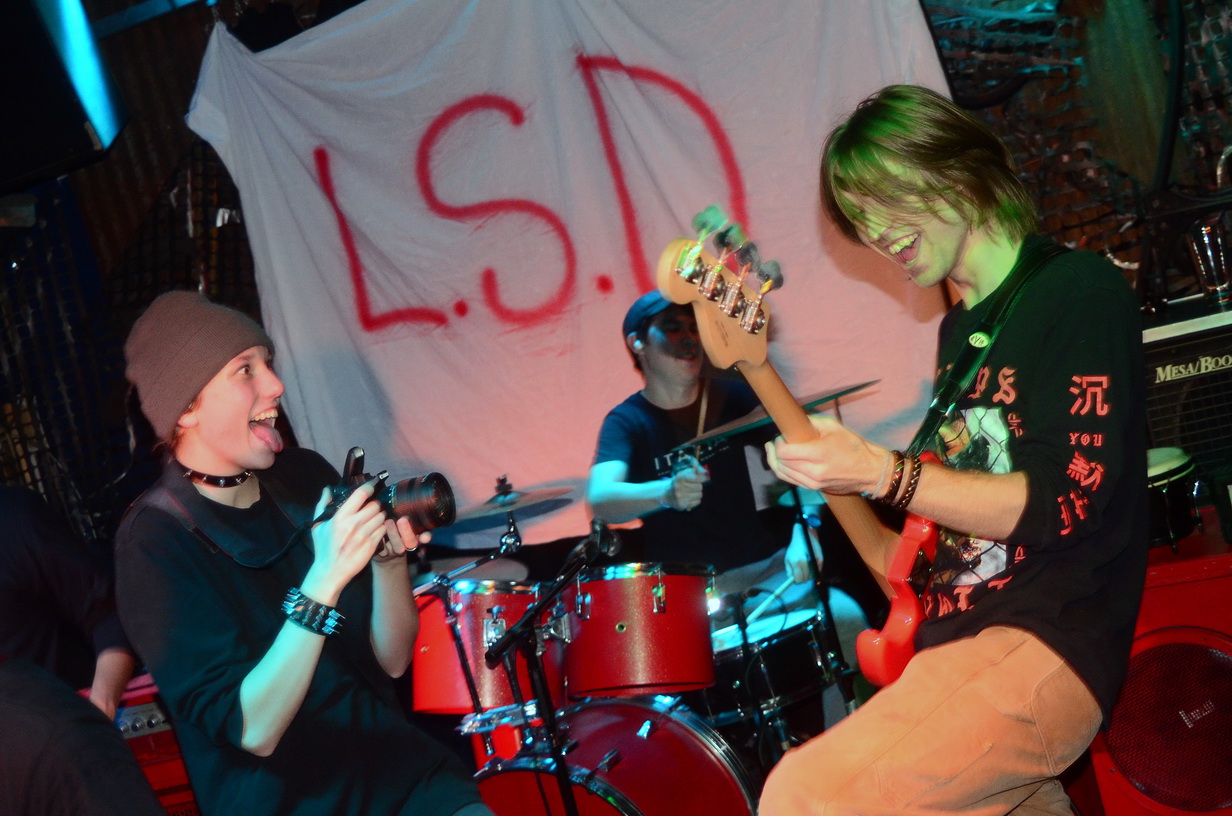 I made my way into the Bovine Sex Club to cover the album release party from Lucid Smog Disorder. What I was not aware of is that the other two acts, Live Post- Mortem and Shot Down Twice had singers with the gift of having a thousand expressions. It certainly made my job as a photographer much easier.

Life Post Mortem hit the stage and within mere moments, you knew there was going to be something to witness. Right away the singer came on like a banshee possessed by a Heavy Metal/Punk version of Syd Barret. His wailing was intense and his eyes bulged from his bedeviled attitude. The first song was over when I overheard an audience member  saying, “Could you have played any worse”? Well the sound was still being tweaked and after Covid, you need time to get your rhythm again. Well that happened as the band held their ground and let the wild man loose to do his thing. Speakers were being rocked and the sounds were good and trashy. This is a Rock and Roll show. If you are a cutter in this world and you listened to this band, the singer’s voice will make everything a little less painful. These guys come at you with a No Fear Attitude!

Next up to give us a taste of urban edgy trash was the band Shot Down Twice. The band is a pure adrenaline rush using every mode of Heavy Poses and attitude throughout their set. Every member was giving 110% which just added to the intensity of the stage and plowed its way through the sold out room of the Bovine.  The guitar player even pulled a Jimi Hendrix and played his guitar behind his head. The facial features of singer Carmen North alone would have pleased the crowd but the blend of Punk, Metal and Alternative mixed in with a reactionary inducement kept the crowd rocking out and even moshing. Hell, the singer for LSD began crowd surfing to add to the mania that was sweeping the room. They are confident and fun. And guys, I did notice you throwing the great Sabbath song, Supernaut in there, in case you thought nobody was listening. Serious horns up for that moment!

Here are some images of Shot Down Twice:

Well we come to the moment of truth. Lucid Smoke Disorder was finally up and ready to debut their new album, “Psychedelicacy”. They played their punk concoction from beginning to end. This album is laced with all the great punk riffs you desire as well as some straight forward rock moments and even threw in, an almost tender moment. That one didn’t last long. The overall blitz was all about having some razor edged fun and maybe partying a little too hard. Opening with an anthem of sorts,” Good Morning USA” was chant worthy as they quickly slipped into the tripping, “Psychedelicacy”. Did you know if you put the fist letter of this bands name together it would be LSD… fascinating stuff. We had “Skeletons dancing in fancy shoes”, during “Witching hour”. It seemed after each the song the level of disorder grew a little more. Hence the name!

The real moments came when Jack took a guitar that they gave away to a fan earlier and smashed it on stage. Oh, how Pete Townsend of you. He even got a sing-along with a “Pathetic”, song and told the crowd how pathetic they were. He eventually went travelling again through the top of the crowd and surfed like the maniac that he is. The crowd began to bring beer to the stage because the bass player was getting quickly dehydrated and needed a buzz. Even in the middle of a song Jack would yell out- Somebody throw me a lighter! Well that happened as Jack proceeded to show off his slide guitar skills. We don’t need no stinking lighters…we have a crazy crowd!

They finished off the night with the ever cheerful song, “Misery”. Fans and photographers jumped up and celebrated the new album. And that was that. The Bovine got an eyeful of the most expressive bands in town. Make sure you add at least one to you list when going out to grab some live music by the balls. As a final note… a very loud shout out to Save Toronto Music Venues for putting this great show together!

Here are some images of Lucid Smog Disorder:

Here are some links you need to know about:

← The Sun Rises on Solarus again!
Lean and Mean Cowbell →