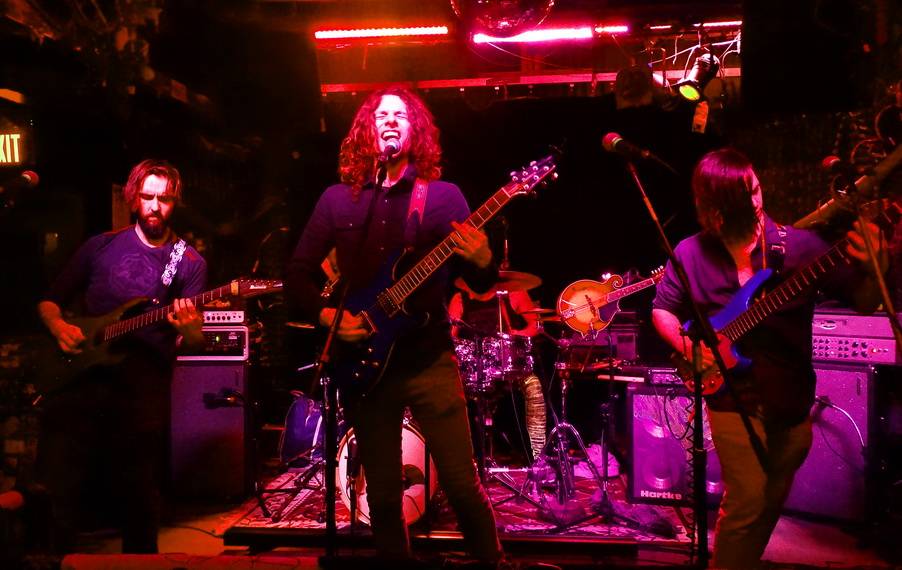 It’s Wednesday night at the Bovine Sex Club and the place was packed. Toronto, you are starting to make me proud, because you don’t care that it is a workday tomorrow, only that 4 special acts are about to hit the stage. This is what Toronto needs to strive for: a well placed ranking amongst the top musical cities in the world. Tonight was a small victory.

First up was sort of a Punk/Thrash/Ska band with plenty of rainbow sprinkles to feed your ear buds. The band is the Paper Parachutes. On the first song the guitarist went into his solo as well as some kind of epileptic fit. It was both intense and fun to watch. The singer reached into his bag of tricks and pulled out various percussion instruments to add to infectious sounds that had the entire crowds’ attention. They went into some South American grooves with the singer doing the songs in Spanish. I believe they were channeling some early Santana at that moment. Overall, Paper Parachutes had a very bouncy and fun energy and was the perfect opening band to get this flock off and flying.

Here are some images of Paper Parachutes’ performance:

I am no stranger to the next act, Jupiter Hollow. It was the reason I was there in the first place. I just love their presentation along with their progressive thrash swirled in with some memorable melodies. This day would see a different side to them, due to technical difficulties. As the set up should have been completed they had a couple of glitches thwarting their mission. Just as it seemed they were about to give up, the horde in the bovine would not give up on them and eventually it was time for takeoff. They only had enough time for three songs, but boy was it worth it and the Toronto legion showered them with appreciation. It was another feather in the cap of a revamped Toronto spirit.

Here are some images of Jupiter Hollow’s performance:

Now the band everyone was talking about went on next. This would be Dizzy Mystics from Winnipeg. This was the first time they ever played Toronto and I know it won’t be their last. The array in the foyer showed this band a good time, and with honest responses. The band their began their set with some random noodling that simply headed into a full on warpath that stomped you where you stood. On the second song the lead vocalist goes into an onset of vocal gymnastics that kept you wondering where he was going to leap next. Their sound was full of maddening and monstrous stomps, created by four frantic chefs creating a scrumptious buffet for the pickiest eaters. By the time they reached the end of their set, they were in a full assault of all our senses and you didn’t know whether to jump or ride it out. I say let go to Hell and back again!

Here are some images of Dizzy Mystics’ performance:

Finally the last spot belonged to, One in the Chamber. I looked around and the place was still packed. These guys went with a more straight forward hard rock set. What kept you there was their grooved based Rock and Roll. They even had some pretty cool Rock poses. They did a cover of the Royal Blood’s song, “Figure it out”. This was a very good choice for this band. They kicked it out until the wee hours, and eventually let the weary rockers get a few hours of sleep before the dreaded work day ahead. The band let everyone know this was a good time to be a band in Toronto. I couldn’t agree more. If this is what we are seeing in the cold weather, just wait until we begin to warm up again. In the meantime continue to see bands in the cold and have a warm drink to keep you there and Rocking, or Jazzing, or blowing the Blues away; whatever floats your boat.

Here are some images of One in the Chamber’s performance:

To learn more about these bands go to: