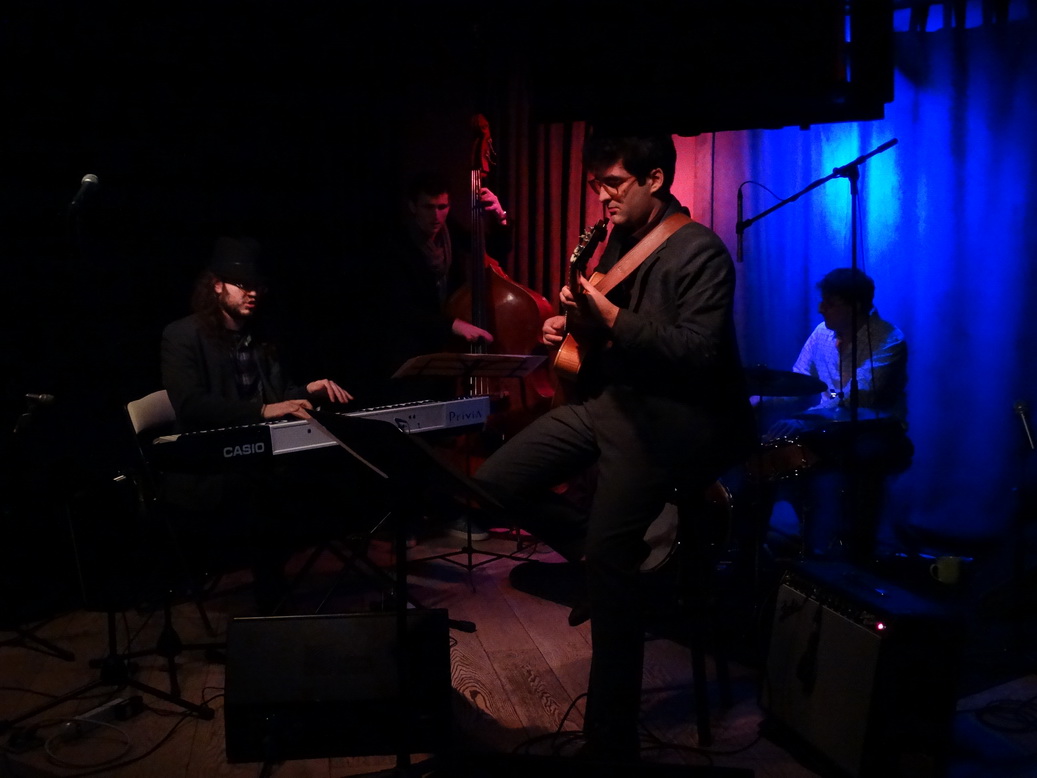 What do get when you cross two Canadians and two Americans in a Micro Brewery? Well you get Ben Rosenblum and his band playing at the Burdock, located on Bloor just west of Dufferin St. The opening to this place is a restaurant that serves very fine libations and then if you head on through a door you will find yourself in a very intimate musical setting to witness quality bands. Ben Rosenblum just so happens to be the talent there this night. He is on a tour promoting his new CD, “River City”. I will be reviewing this one soon, so stay in touch.

Ben quietly walks on stage with his soft spoken demeanor and his New York style. He sits back behind his keyboard and opens with a Victor Young tune called, Delilah. It is both laid back and quite lively at the same time. I think I am going to like where this is going. He chooses yet another tune, this one by Luiz Eca called the Dolphin. Ben brought out the accordion for this one and the energy became graceful and full of sprite. Not only can you feel the playfulness of this number, but you can witness Ben’s personal humour as he throws in some musical jests towards his band.

Like I said earlier, there was a fine North American mix on stage. Ben is from New York, his drummer; Ben Zweig is from Brooklyn, NY. The Canadians were represented by Jonathon Chapman on Bass, all the way from Kitchener. From Montreal we had Sam Kirmayer adding a fourth dimension of sound from his guitar. You see, Ben’s band is a trio and Sam was a special guest, and he made it special.

Throughout the evening each song had its’ own specific and unique mood. The emotive range could go from a sense of empowerment to sheer freedom. It could be both very pensive and truly explosive. There were moments of fulfillment with the recall of personal memories. The playing was very controlled with the illusion of being truly carefree. The best song of the evening for me was an original piece called Chain Chomp. Ben got to show off his high flying wizardry as he metaphorically swung his lasso wildly around your nature and whirled you into a concoction of joy.

The evening ended too soon, but Ben did one last song that had a gospel sensation and sprinkled everywhere around the room. It was quite infectious as the congregation began to clap for most of the song. You don’t see that every day at a Jazz show. Ben looked very happy to be seeing some old friends in the audience as well as meeting new ones. I know he will return to Toronto for more shows, and you can be my special guest to come out and feel a new wave of jazz emerging.

Here are some images from Ben Rosenblum’s performance:

To read more about Ben, go to… https://www.benrosenblummusic.com/

To find The Burdock for great beer and music go to… https://burdockto.com/