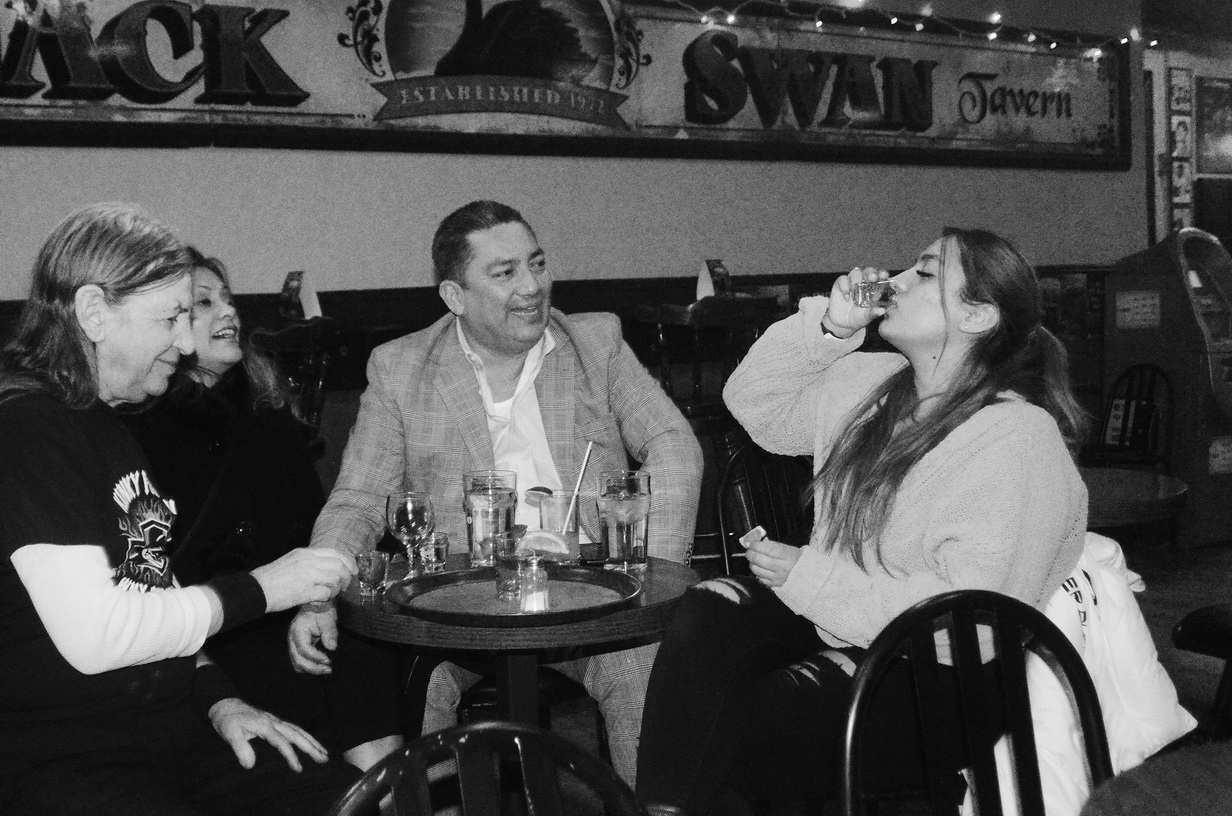 It’s Wednesday night, after work, you’ve had a bad day and need to change your mood. This would be a good time to head to the Black Swan at Danforth and Broadview and let the music sooth your weariness. Sebastian Agnello is a staple singer/songwriter writer in the Toronto scene for decades and he is the guy that will help you forget your day. His songs, not only have a gentle human condition to them, but they also poke fun at life. He starts with a song about songwriters, then slips into, of course, drinking songs. He then twists and turns humanity on you and sings about Grandma’s tooth, ugly middle aged people and even a horse’s ass. If that doesn’t change your mood, then you really did have a rough day.

Here are some images with Sebastian:

After a calming set of country style songs, he invites up and old friend named, Darwin Bruce. I like Darwin, he dressed up and looked fine with his hat and vest. His wise and weathered looked helped, as he went into songs about drug busts, cigarettes and weed. I wonder how he know of these topics…

He kept his set short, because his fingers were tired from not playing live for the last two years. Hopefully he keeps coming back and gets his fingers into shape again.

Here are some images with Darwin:

Then Rick Hawkins got up and things took a turn for the wonderful and unexpected. He did an acoustic set of unlikely covers. We’re talking a strange arrangement of popular song reimagined. Here is a list of what came out of one guy. Songs by, Junkhouse, Radiohead, Michael Jackson, Johnny Cash, Pink Floyd, Cat Stevens, Bruce Springsteen, Neil Young, Jack Soul, Bob Dylan and Metallica. It seemed as his set list got deeper, Rick was surprised that nobody was kicking him off the stage, so he just kept playing. I think with a set list like that, nobody wanted him to leave.

Here are some images with Rick:

Sebastian hit the stage again and really seemed to entertain a lovely family whom was celebrating a Birthday. The mother with her 19 daughter turned thirty. You do the math. Her and her husband shared a dance and we even sang Happy Birthday. This eventually led to sitting around their table and culminating the art of doing Tequila shots.

Here are some more images with Sebastian:

This is the kind of hump day you want to have after a really bad day at work, or you just don’t want to go home and watch another rerun of some show you care very little about. Hope to see you there next Wednesday.

← Smell the Tale
Let’s get Funked at the Monarch →