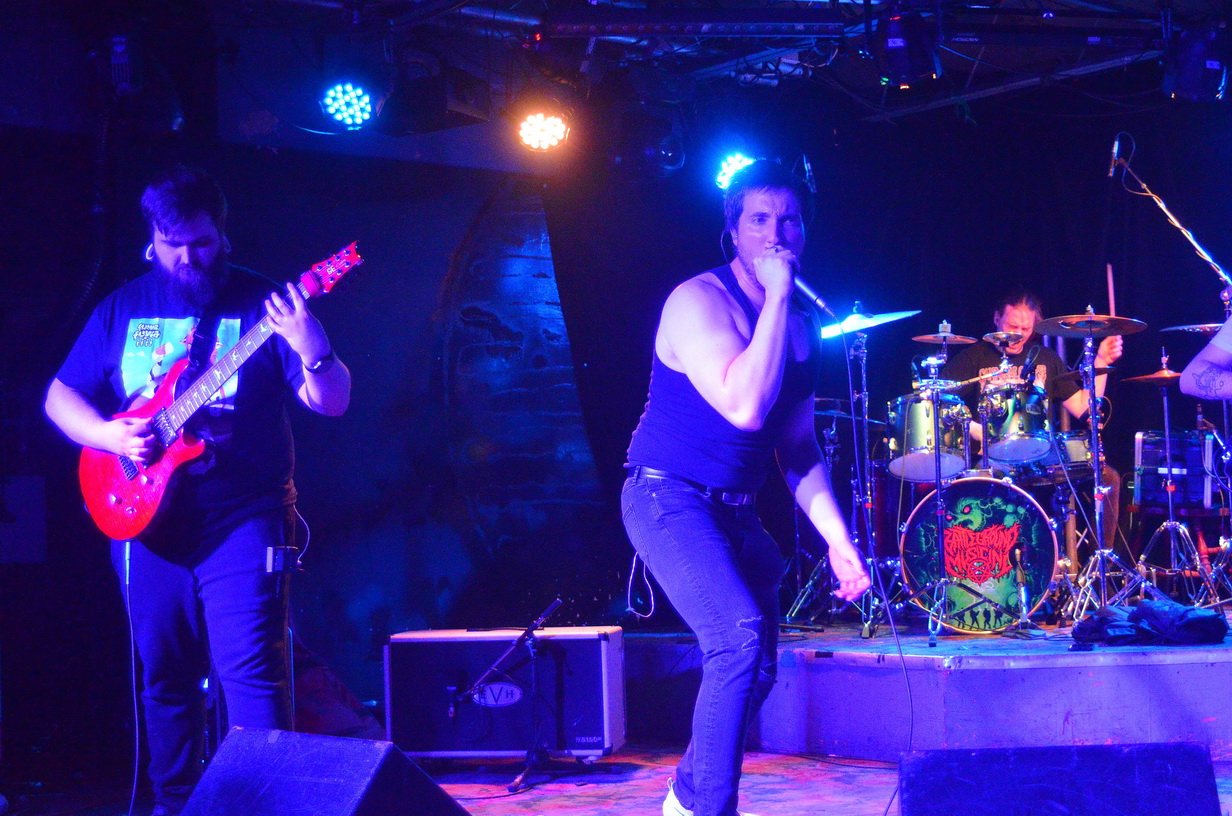 Let’s start with the good news. The Metal Community showed up and both celebrated Bob Shaw’s life and the show raised over $1500 to help Bob’s family in this tough time. Close friend Kenneth organized the bands to play. These were bands that Bob would have truly approved of. Neurotic Entertainment worked on promotion to get the people into The Rockpile Easter Sunday night. The Rockpile went beyond the generous scale and let this event happen with no cost to the promoter and bands. This was truly a great gift having all these passionate people get in and dig hard to make this happen.

I walked in as Dead 3 Days was in mid-brutality. Their speed was brutal, the singer was brutal, and every song was out to crush your bones. I quickly learned that the singer recently joined this band. He has been wanting to do this for about ten years and now he got up on stage with this band and showed the loyal fans they will get what they pay for. He proved out of the gate that he is a great frontman. He sort of reminded me of Phil Anselmo from Pantera: a wild animal crouching and waiting to spring his violence all over you! This is a band that will create a solid following very soon.

Here are some images of Dead 3 Days:

Crème Flesh was up next with their brand of guttural space metal with a twist! They are a three-piece band, Singer, Drummer, and crazy-ass Guitar player. They are a band that truly had their tongues in cheeks with crazy titles like, In space can they hear you crème? Their 007 version of From Russia with aids seem to add a smile to everyone’s face. Even though these titles are fun, the music is a real assault on your sensibility. The singer sounded like the character, Punch strung out on angel dust and placing his violence all over Judy. This was their debut on stage as well, and after what I saw they will continue to brutalize audiences for some time to come.

Here are some images of Crème Flesh:

The final band up was Pillars of Autumn. I forgot to ask where the name was inspired from, but you can contact them and ask yourself. I will do my best to describe this excessive band. A Symphonic Death Tsunami is the easiest way of describing them. They are a very complicated band that spans different Metal genres. Death, Speed, Symphonic, Experimental. These guys are all over the place and will keep you on your toes wondering where they will go next. They are totally unpredictable and not for the faint of heart Metal Fans. Hair Metal band fans need not show up for these guys. They have dramatic openings that follow a jarring sound of disharmony and discord. It is both horrific as it is fascinating.

Here are some images of Pillars of Autumn:

All in all a great evening of headbanging and moshing and one couple ready to have an open experiment of their love spill out into the club, made this a classic metal concert. Thanks again to The Rockpile for hosting this event for free, Neurotic Entertainment for getting people through the doors and the bands who played hard to honour a well-loved man in the Metal community.