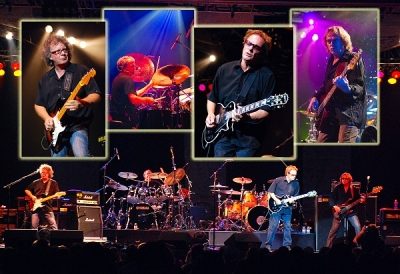 Lately I was lucky to correspond with Myles Goodwyn from April Wine. Since I am a fan of the band for many years, I was thrilled that he would answer a few questions for Blast Toronto. Last October, he released a record called Myles Goodwyn and Friends of the Blues 2. His friends this time around are Kenny Waynes on Keys, as well as Ross Billard. Acoustically speaking he has, Matt Anderson do the dirty on, “Like a dog, ain’t had his day”. He has Dewey Reeds on Harmonica and Van Hansolo on slide guitar. Also sliding in on the action is John Cambelljohn, and finger picking next to him is Jack Semple.  We can’t forget David GoGo on guitar and Angel Forrest and Jeff Mosher helping out on some of the deeper tracks on this album. Both April Wine and Blues fans should add this to their collection.

I kept the questions simple and fun, so enjoy this laid back interview with Myles Goodwyn…

MG – A fellow band member thought it was a cool name and suggested it. No special meaning.

BT – What are your musical influences?

MG – With April Wine it is Rock. With Myles Goodwyn and friends of the Blues, it is blues of course.

BT – Where do you see yourself 5 years from now?

BT – Musically how are you growing?

MG – I am always working on writing on my songs.

BT – If you could, what Toronto venue would you want to play?

BT – Who would you love to open for?

BT – Best or worst performances you have had.

MG – They are all great!

BT – Are you recording in a studio, if yes , which one?

MG – Yes I have a Home studio.

BT – What advice would you give to another similar musician?

MG – Work harder than everyone else.

BT – Who was your favourite musician you got to play with?

BT – Musically, what album is your guilty pleasure.

BT – What would be your top three albums.

MG – The First Led Zeppelin, the first Taj Mahal, and any Beatles album.

BT – Who is your favourite Canadian group or musician?

BT – When do you think the tipping point in April Wine happened? The moment you went from an up and coming band to a solid Rock outfit?

MG – April Wine was successful in Canada with the first album in 1971, but our album Stand Back in “75 was the record that went Gold and then Platinum and really established us in the industry.

BT – Having numerous amazing albums, which one are you most proud of, and which song do you love playing live?

MG – I’m most proud of Stand Back, I like playing Roller live!

BT – Seeing you on various occasions, I noticed the band likes to crank it to eleven, did you do this with the attitude that louder is better?

MG – We are not that loud on stage, what you hear is the PA and of course that’s controlled by the front house engineer. Unfortunately, that person can get carried away.

MG – It is a cover song that I added a verse to with Hud’s blessing.

Here are some images of April Wine: