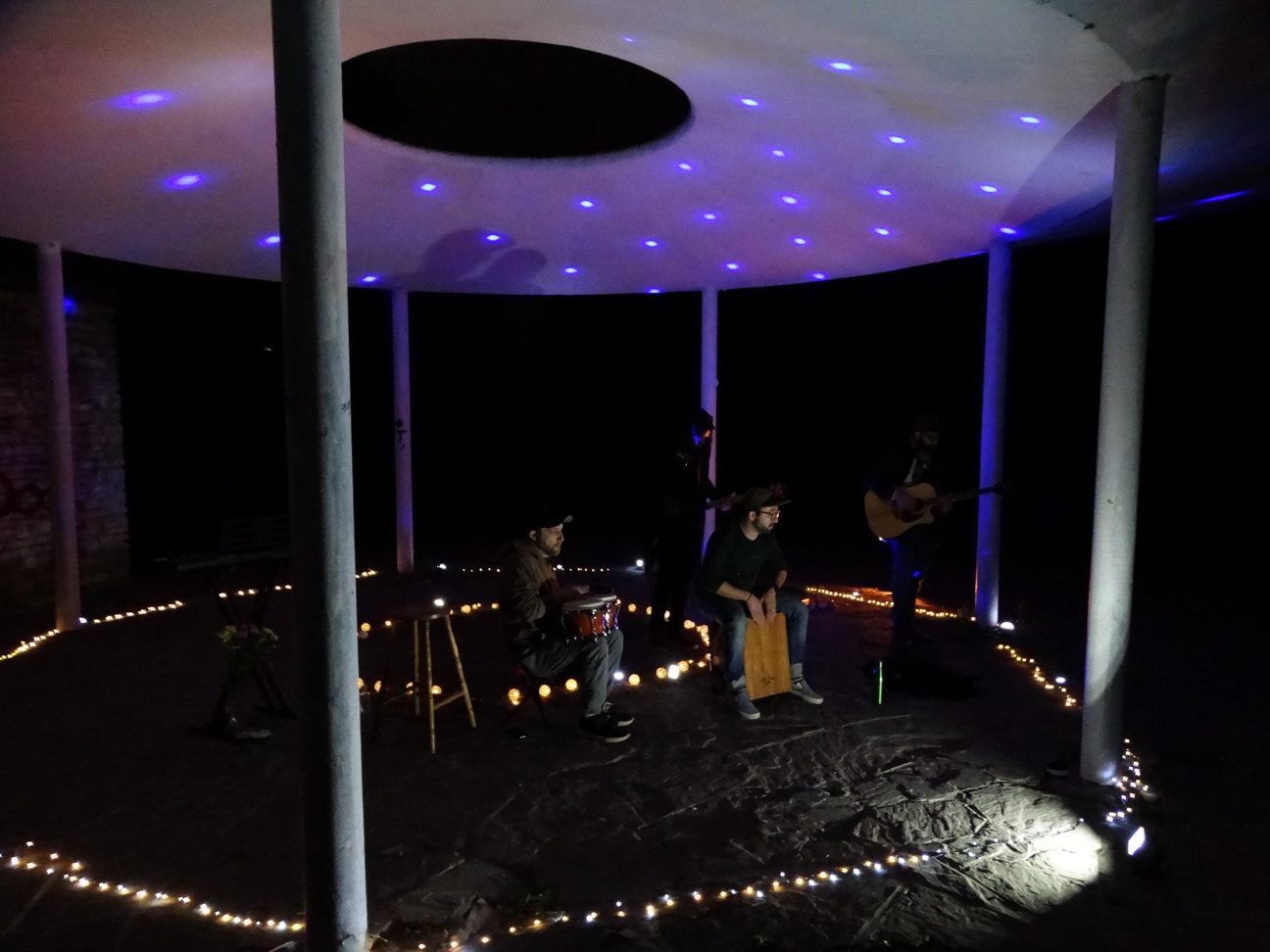 I just discovered there is some live music in Toronto and if you are as starved as I, you will find this story to be a breath of fresh air. There is a place called the Oculus, it is a unique pavilion hidden away in a park down by the Queensway and The Kingsway area. I will provide a map for you later. This secret Covid Ball is held every Thurday night starting at about 7:30. Musicians should arrive earlier to sign up for this soiree.

One of the major takeaways I got from this gathering was that the musicians didn’t just bring their instruments to this conclave, but they brought their personalities. The other takeaway was watching how they interacted with each other. The support system was very strong and when another musician felt they could add to moment, they would just get on stage and fill in with some new dimensional sound. This happened quite a bit, and that is when you may hear someone step into a muddle, but you may also witness the luminosity of improvisation.

There were many of those. One that stood out for me was everyone on stage performing Dolly Parton’s Jolene. It was fun and joyous, but in the far distance I could hear this pocket trumpet heralding in the dark ever so softly, that it really did seem to tie the entire song together.

I just wanted to add that a young woman named Caitlin Stephen was the coordinator for these roundups. It was the first time I met her, and it was the last show she will put together before she moves on with her personal journey. Everyone there paid tribute to her undertaking of these personal events.

This is a quick synopsis of some of the performers that took the stage.

We had Arnd on guitar and Cassie on violin playing as if they had been together for years. Even the dog named Rummy joined in for some well timed howling.

We had a comedian join us to throw Covid joke around as well as share his special brand of Parkdale humour.

Norm and Nicole got up to do a pop song from the 80’s. I think the glass of wine in her hand gave her that extra bit of courage to have fun with this open crowd.

We then had a band that called themselves Bort. I believe it is   a pop culture term from TV. They got down and funky, with Play that funky music.

Dennis was up next and was going solo when Norm jumped in to add percussion. Then Caitlin jumped in the next song, because she could not pass up the opportunity to sing the song One by U2.

First timer Mike got up to render an a cappella tune done in Cabaret style. For a first timer going for the gold, he nailed it. The crowd wanted more.

Cassie came back on and hit us with an original song about needing love. I could envision this going well in a recording studio.

Jean Baptiste came on and rocked our world with Baba O’Riley and a little Sly and the Family Stone.

Virgil walked on with his cool hat a guitar and harmonica, and radiated throughout with a Bob Dylan tune.

I may get this one wrong… A guy who calls himself An Amateur played the pocket trumpet and accordion and charmed us with how he could balance these two instruments together.

Then we got Josh who played a couple of Paul Simon songs and got just about everyone up to jam them out with him. The songs… American Tune and Graceland.

I am sorry I forgot this person’s name, but he brought on a homemade Hand Drum made out of a propane tank and charmed us with his soothing rhythms.

It was at this time everyone got up on stage and decided this was a good time to do a jam session to finish off the evening.  Caitlin got dibs on the final song and so the musicians jammed out to the song Angel from Montgomery.

If you are like me and have that need to hear live music, this is what the doctor is prescribing. I had a fever and now the only thing I need is more Oculus!

Here are some images of what happened down at The Oculus Pavilion:

Here is the map to help you get to The Oculus Pavilion; hope to see you there one Thursday evening.