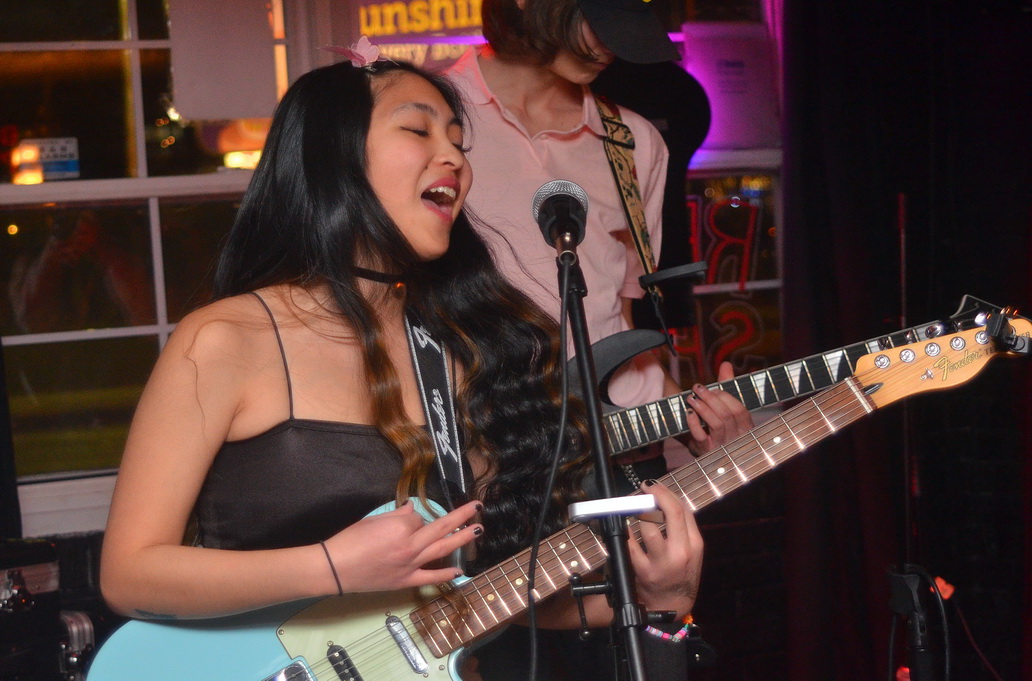 Save Toronto Music Venues wrapped up their lengthy Bitchfest festival at the Tail of the Junction last night. There were 4 four bands that were fronted by some rocking ladies who could command a stage. I didn’t even know the first band when I walked in, but was struck how powerful their presence was live. They are called Vintage Flight and they love covering classic rock band from the 70’s period. I caught them doing some Doucette, The Who, Black Sabbath and more. This band was tight and strong. They had fun while creating their version of chaos. Their high energy of youth preserved the energy of these bands back in their days of power. Thank Satan I was wearing my Black Sabbath T-shirt as they powered their way through War Pigs, and the singers scream during Won’t get fooled again, could knock you out like Mohammed Ali. They come from Kitchener and I can’t wait for them to hit up Toronto again!

Here are some images of Vintage Flight:

Next up was NERiMA, a very effervescent pop band that oozed with pure pleasure. The band had both a smooth and sloppy sound that fit today’s Indy scene. They sang about all kinds of different love. So if you have some kind of love in your life, they had a song for it. Every song had a certain catchiness to it. If it was Covid, we would all be sick and loving it. They finished off the evening with Paramore’s song- Misery Business.

Here are a couple images of NERiMA:

Up next, from what I have seen and read, is a fan favourite that STMV seems to favour, The Gens. It was obvious from the start; a lot of the audience came to hear these to ladies as they had the audience in their grasp as soon as they walked on stage. Their original arrangements seemed to really strike an odd chord with everybody. They even threw in some Whitney as the wanted to dance with somebody.

Here are some images of The Gens:

The reason I went to this show was to witness how short a walk it is to Pluto. Well, A Short walk to Pluto did not disappoint. They opened with a Ballroom kind of blitz with a little oompapa music to get things rolling. They quickly became a solid wall of rock. Early in the set the singer went into Alanis Morrisette’s-You outta know, with a sense of fervor that kept you engaged. She nailed this one to the wall. If these guys worked harder on stage presence, they eventually will look like a hematic traffic accident that you cannot look away from. Their version of Message in a bottle got the crowd singing, but it was their last song of the evening that opened the flood gates. Their original song, “The Flood”, started off with a classic Led Zep riff and delved into a mystical journey of rock exploration. Somehow there was even a kazoo solo in there that sounded good. The crescendo was elaborate and intense as they came in for a great landing that left the evening completed satiated. This is the kind of stuff I want see the band do more of.

Here are some images of A Short walk to Pluto:

I hope you bitches out there keep practicing. Get it together and bring your sound to Save Toronto Music Venues, and you may be on the next roster for Bitchfest!

Click on these links for more information about this event…

← A Doom & Gloom Function in the Junction
Happy Birthday Frank! →