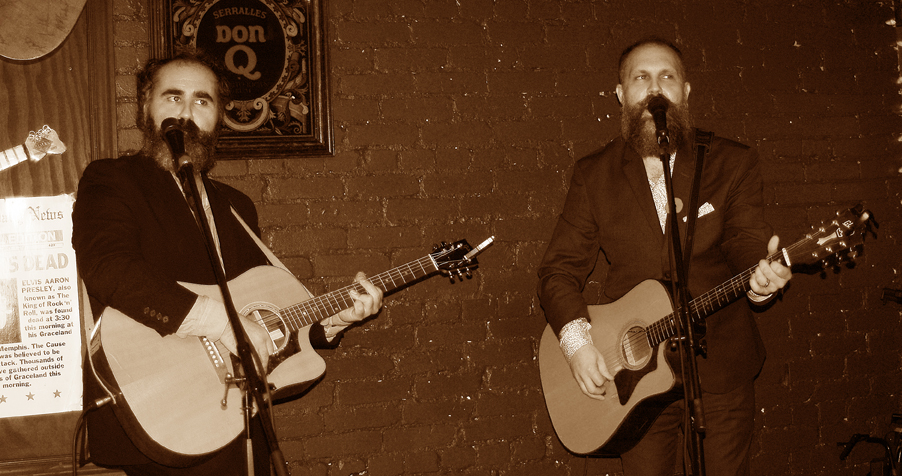 There are two brothers from Saskatoon named Aaron and Shawn and they sing incredible songs that sink into your soul like warm melted butter on a fine piece of toast. They performed for the second time at a great venue called The Local, located in Roncevalles.  They played between   5 PM and 7 PM. Friday night and it was happy hour. That may have been a little early for a musician, but I would agree that it is a time where the working folk can sit down and begin their weekend with a little perfect cheer.

The audience consisted of friends that knew their music and a few newcomers. They have a solid command of great story telling, that have humility and humanity built in. They have very heartfelt lyrics and a great sensibility in their playing. One of the great lessons of the early evening was a song that taught us, “Where would I be without music in my heart”.

There seemed to be a lot of dedications to various audience members throughout the performance. Clearly these are people who truly have a devotion to these two men. They even have a song where you learn,” Everybody wants to be my friend”.

The boys began to promote their new CD, ”Talk is cheap”, and asked if anyone had any requests. Well I just yelled out, play #5, as random silliness, and they said I made a good choice. They went and played a song called, “Time and time again”. It seemed to be the right song for their set list. They then went into a song that they described as Ukrainian Funk, and I think they nailed that one pretty fairly.

The Karpinka Brothers came off as a pair of very warm Teddy bears and the fact that they played from 5-7 pm made it all worthwhile. This should be a new way of touring. We have just witnessed the Happy Hour Tour…

To learn more about The Karpinka Brothers, go to… http://www.k-bros.ca

To see who will be playing at The Local, go here…  http://www.thelocalpub.ca/

Here are some pictures from The Karpinka Brothers’ performance: