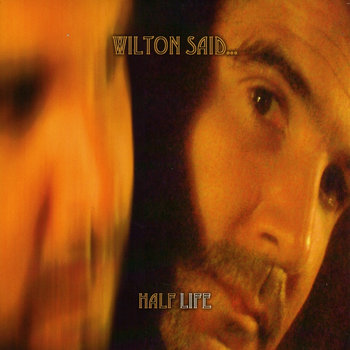 Wilton Said invites his audience in for a collection of eclectic sounds and emotional altering moods. He is the kind of musician you never really know where he is taking you, but you trust him enough to know that it will be interesting and somewhat safe.

The opening track, Half Life, is a progressive primordial soup with an assorted array of mixed music. It starts with what feels like a modern version of Ravel’s Bolero, then jumps in with some early Marillion sounds. I happen to know Wilton loves Marillion, so a little shout out can’t hurt. He slides in with some classy Genesis keyboards, and finishes with what sounds like Ian Astbury’s vocals. This Half Life lives with a lot of fear.

The next track, Endorphin Crash, comes across, like a Boxer’s sparring partner on a crash course towards a brain injury. The we go into the instrumental, Bydlo. It is a short piece for gothic funeral marcher’s on amphetamines. Nash the slash and Robert Fripp would get a kick out of this one.

Track four, Down, is interesting. It is clearly a song about trying to take someone out of the game. Where it gets interesting is the middle section when the same message is being applied but on the opposite end of the spectrum. The slower sounds comes off as a psychotic 98 pound weakling, fantasizing about winning the battle.

“Simple”? There is nothing simple about this song. It starts off with the dream of having a normal simple life, but has to go through a journey of extreme complex situations. This schizophrenic  pilgrimage weaves through  varying clusters in search of a semblance of order. The final segment is fascinating, as if you are speeding towards your final goal, the simple life. But in the end did you accomplish your fulfilling ambition?

We finish off with, City on the water. Immediately I feel extremely drunk on a beach somewhere, straight out of “The Rum Diary”. I feel a faceless helper guide me around my blurry surroundings, to a restful sleep.

Wilton Said is a composer of interesting stories and sounds. He wants to take you to places you have never been, or places you feel comfortable in misfitted skin.

One Response to Wilton Said- Half Life