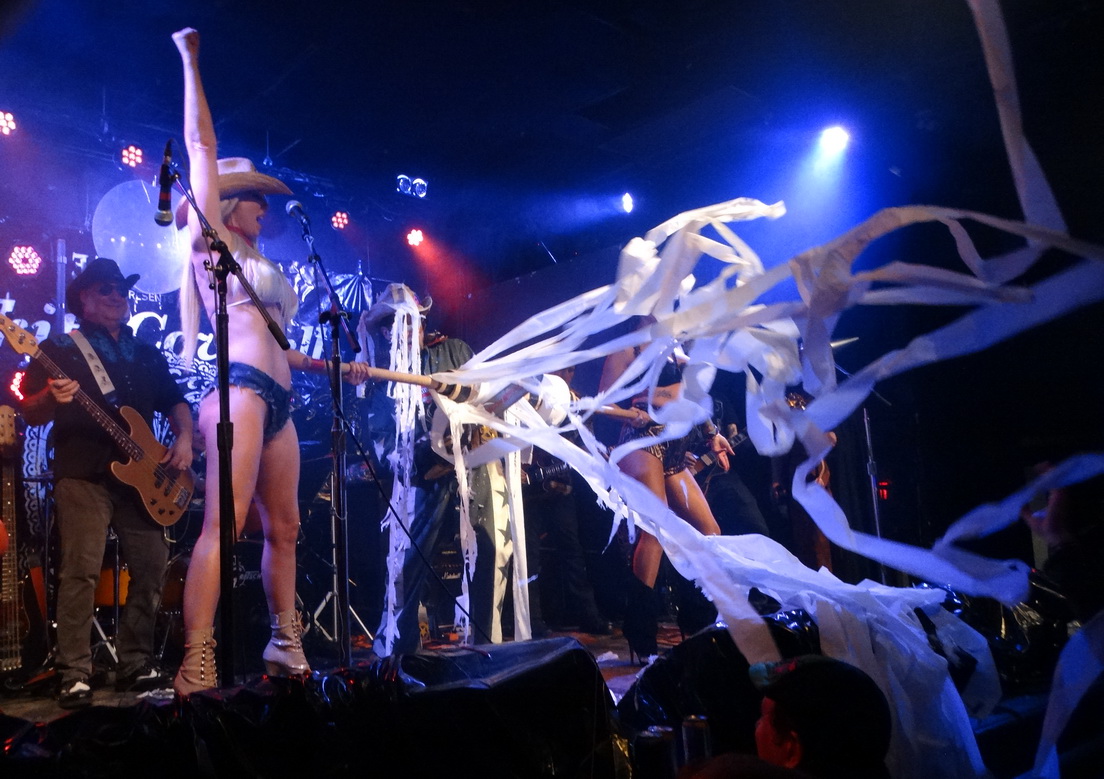 Did you wake up on Saturday while the dog threw up on your rug, or was that you?

Did your partner smash your face through your glass coffee table but you realize you are single.

Did you realize you have lost your keys to your place but still managed to make it inside…HEY, this isn’t my place.

Chances are you were at White Cowbell Oklahoma’s 20th X-Mess bash the night before.

The night started of innocently enough, with a monolith being erected on stage and a big gorilla dancing around it, while two hot chicks enticed that poor ape off stage for who knows what!

We were in the midst of an alien invasion as the monstrosity revealed he had been fooling this audience for the past 19 years by playing some of Toronto’s more notorious characters, like Jian Ghomeshi, Rob Ford, Justin Trudeau, amongst others. We were in awe of a Cowbell that could spit fire and almost set the ceiling on fire (Am I at a Great White show?). What did they put in my tea?

I could have sworn there were crazy chicks that would hassle us with their tassels. Is that when I began to see double? Or was it Double D’s!

Wait wait! Did I smell gasoline on stage as some dude named Chainsaw Charlie began to create art with rolls of toilet paper? Man my mind was feely shitty at that moment. I really needed an upper to get me through this show. I think that was when Charlie began to rip through giant bags of white stuff. It was like being inside a giant snowstorm and was reminiscent of your worst cocaine induced psychosis since you had that slight meltdown working at the post office delivering letters to Santa Claus. OH Yeah, speaking of Bad Santa, I think he put me on the naughty list, because he showed up at the show a relieved his weak bladder all over me. My eyes could no longer see as what I believed to be the North Pole bashing me in the brain and then falling about on stage.

Wait a second, was Don Cherry there and more importantly was his new dog Blue a gorilla now? What the hell did they put into my Tea!

Clem the singer went a preachin’ to the choir as he climbed onto a very wobbly pulpit to get the masses to praise something, I’m not sure anymore. It could have been something about mental health and addiction but that was when the stage exploded with the entire cast of character whipping everyone into a frenzy where the fed you the taste of the south that could never leave your mouth.

Well I have to admit, this will be one of the best evenings I will never remember. I can’t wait to go into recovery to do this all over again next year! We could all use a little more COWBELL!.

Here are some images from White Cowbell’s performance:

See Them Live! They are the best band you will never remember!