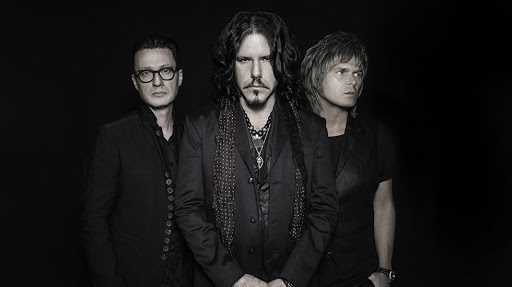 Back in 1991, a self titled album was making some noise on the airwaves and a song called, “Save Me”, began to grab the attention of Toronto. I was lucky enough to grab a tape of it, because this recording is a pretty rare find. A year later, the debut album came out called, “Splendor Solis”, and The Tea Party was making their mark as a new big band Canada could be proud of. The only problem was that their sound was always being compared to Led Zeppelin, and it didn’t help that the singer, Jeff Martin sounded like Jim Morrison from the Doors. Their second album saw some maturity and began to pull away from the comparisons to Zep and the Doors.

In 1997, The Tea Party released, “Transmission”, and the transition to a band with a completely original sound was born. The organic Rock and Roll sound was replaced with a new modern industrial sound mixed with traditional instruments from around the world. This blend of old world music and hard rock electronic tampering brought together a monstrous tour de force from an otherworldly dimension. The opening song, “Temptation” is the perfect opening song to seduce you into the foyer of new sounds that leave your brain both on fire and numb at the same time. It is as if there are psychic vampires built into each song to feed on pain and create a new reality before this album finishes off. Great example of this thought process is in the lyrics of songs like, “Psychopomp”, and “Release”, and especially, “Transmission” and “Babylon”! The final three songs carry a dark rich romantic energy that finishes this recording off extremely well. All in all, this is simply a great Industrial Gothic album that has none of the traditional gothic sounds. It is an album that truly stands out on its own inceptive quality.

As a side note the cover is a painting by the Bass Player, Stuart Chatwood, called, The Earth we Inherit.

Here are some images of The Tea Party: