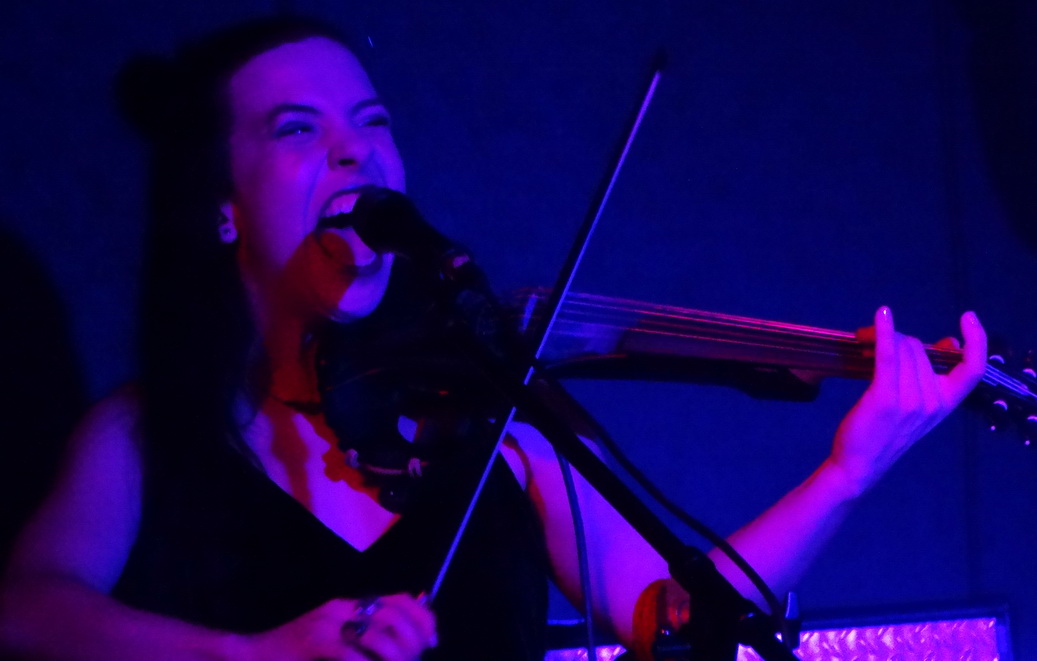 If you read my Facebook message about this show, it said Do Not Miss it, you will regret it. You may not know this but you regret it. You missed three original performers that could have enriched your spirit and tapped into your unused psych.

Robin Hatch performed her solo material from her past and eventually showcased her new material at the end. This for me was an important clue into what she does so well. When you first hear her play, you can hear a lot of quirky notes that seemed inspired by a slightly deranged and decomposing creativity. There are two distinct sounds being simultaneously played. It is disturbingly beautiful. It looked to me as if you are watching a friend enjoying some high tea on a Sunday afternoon as anxiety is constantly whispering in her ear. She can be seen as the unseen prolific breakdown and still smile a sweet smile.

When she addresses the audience she does with her truth and projects it with a most uncomfortable comedy sketch, but is incredibly charming throughout. What I found fascinating about her new material was, the amount of complexity and focus she gives with this well deliberating musing of an artist trying to shoo away the buzzing that goes on inside of her. That takes a lot of discipline

Here are a couple images from Robin Hatch’s performance:

Next up was a solo cellist named Raphael Weinroth-Brown. This maestro on the cello is a perfect combination of Dr Frankenstein and his monster in one person. His style can be fiery, apocalyptic and metallic at times. It can also be highly reflective, filled with forlorn introspection and dreams of scenic beauty that overtly want to be released from a troubled soul. When he is playing his metallic side, I have visions of him orchestrating with a band like Opeth. His easy, dry timbre reminds me of Mikael Akerfeldt from Opeth. Raphael went into an epic piece of music that began like sound poetry and soon journeyed into musical landscape as vast as the Fjords of Scandinavia. His layering technique is simply awesome and how he handles the percussion section adds a powerful dimension to this overall sound and gives this piece the full flavour of flight.

This is the kind of artist you want performing on your next recording; it can only enrich the entire experience. I say that because a gothic chamber music mistress named Anastasia Minster has Raphael on her up and coming recording. I simply can’t wait to hear it.

Here are a couple images from Raphael Weinroth-Brown’s performance:

Headlining this triple bill was Volur, a young and growing band that should be one of the great bands that Toronto would love to show off and talk about whenever they play. Goth music when I was growing up had a sense of cheesiness to it and I am sure it was made fun of whenever people said, “I am into Goth music”. Well those days are over, because we have Volur to stand proud and scare the crap out of anyone who poo poo’s on this kind of music. The band comes out with an ominous fog that begins the ritual. An extra violinist steps on stage, it is Raha Javanfar and she adds that element of the procedure for the constituents of the displaced.

As we dig deeper into songs from the past, the conjuring gets stronger and elemental banshees wail through your horrific rationalization. Whether you are frozen in fear or awe, the results are always going to be the same. You will leave a newer person after the night is over. Now we get to the best part of the evening where Volur is going to release their new movement that they have been holding onto for the past three years. Raha, rejoins them on stage, along with a young violinist with a luminescence glow, named Zoe Santo. Add to that a return of pianist, Robin Hatch and Cellist, Raphael Weinroth-Browne. Together, they played what should be a true top 40 hit- HaHa… “Breaker of Rings”. It is a slapped together 21 minute song…only kidding on the slapped together. It is an opus of dark matter, filled with sorrow, death knells, and an endless spiral staircase that only leads you down into the mire of dark desire. These are the sounds that are seared to your soul as you become a husk that crave well after you have given your eyeteeth as an offering.

The lights finally come back on and you slowly labour your way out like an agent of drudgery. It is another successful evening in the life of Volur.

Here are a couple images from Volur’s performance:

Raphael has a cool web page, check out… https://www.patreon.com/raphcello?fbclid=IwAR1K8PXLN4qRSXP4Zde1zc7mufZR-QFwI3nM4AokknGDIX1AZcXE1yDJevo

To hear some of Robin’s compositions, go to… https://robinhatch.bandcamp.com/