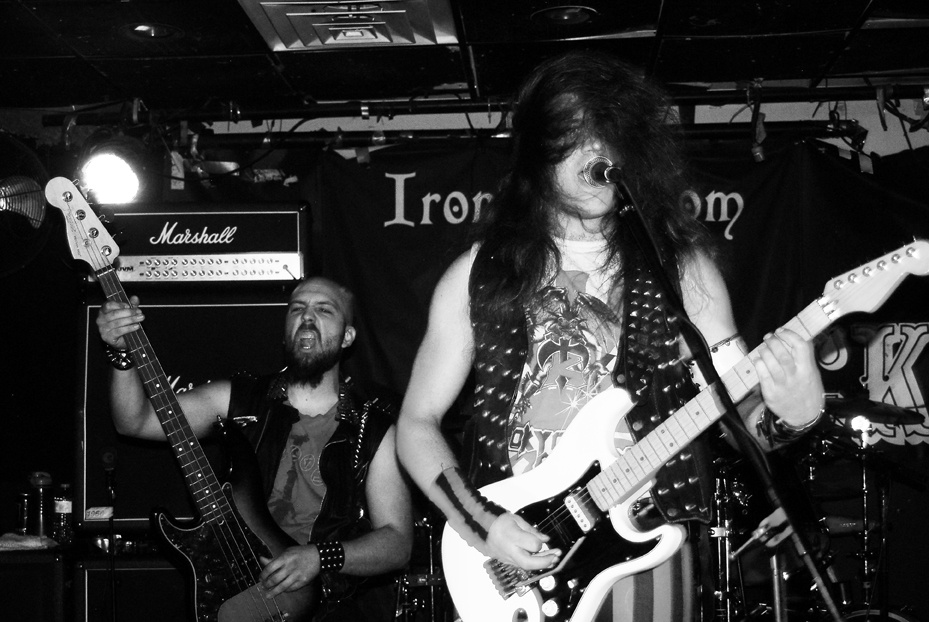 I need to rant for a short bit. I grew up listening to the First wave of British Metal. It was an onslaught of hard fast noise and I loved every minute of it. I was waving the flag high and screaming at the top of my lungs. Metal have evolved into so many sub-genres it would snap that twig of a head bangers neck. With that said it always feels great to go back to that time in the very early 80’s when it was so new and ugly and unrefined.

This is sort of a duo review, because I saw Phantom and Iron Kingdom in the same night at The Hard Luck Bar. They both captured the essence of the sound that was spewing out of the pit of hell. The speed felt right, fast and painful. The outfits of those first sleazy leather jackets and spandex pants, that leaves very little to the imagination. The themes of being on the road, fantasy ideas of dark attacks, and waving the Metal flag with solid anthems are just a few of the ideas that will get any fanatics banging their head at breakneck speed. Both vocalists for Phantom and Iron Kingdom had those classic chops that we love to hear. They are strong operatic vocals that could soar with the high notes. Both bands were well versed in the choreography of a well polished thrashing band. The poses were well represented and really connected with the audience.

Iron Kingdom even had us join in a little drinking game. The song, “Keep it Steel”, every time they mention metal or steel, you had to take a drink. I guarantee at the end of this song you will be running back to the bar for another round.

Here are some images of Iron Kingdom’s performance:

Phantom are homegrown here in Toronto, while Iron Kingdom have to trudge across the frozen wasteland of Canada from Vancouver. These guys must has been weaned on early metal, because you would swear they have been doing this for over 30 years, but clearly by their driver’s license, they are the next wave of 80’s Metal. For any of us now in our fifty’s, we can relate to this sound and clearly the new youth are finding their own pot of gold with finding their own heroes with this vintage sound. So if you have teenagers looking for something on the heavy side that you can share with them, break out all the great bands from the 80’s. I am talking about the big ones like Judas Priest, Iron Maiden, Motorhead and the special bands like Metal Church, Krokus, Anvil, Saxon, and Manowar.

Here are some images of Phantom’s performance:

I really hope this catches on, so us veterans can continue to Rock hard and Ride free. I am not ready for the wheelchair yet, and I think if we get to stand among younger people their youth will rub off on us as we can tell them the Tales of Glory, when we were their age.

To get awesome merch from Iron Kingdom look no further… http://www.iron-kingdom.com/

← Noep, Hiding Out
Bruce Dickinson – Fear of the Duck →