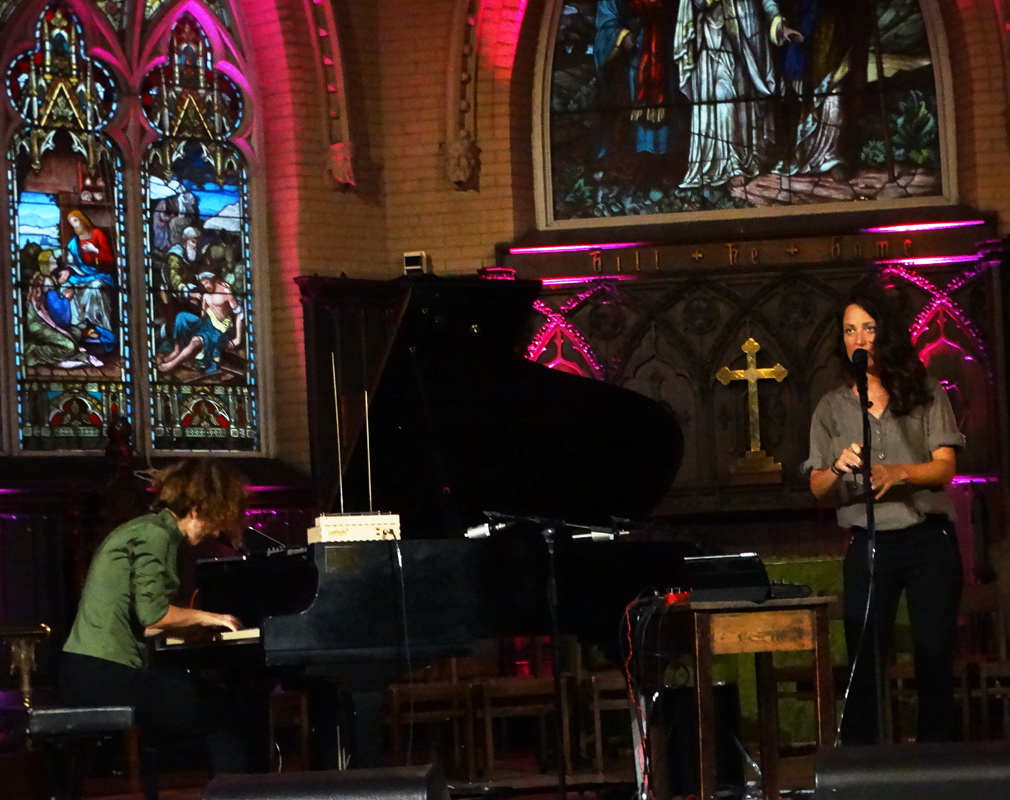 The TD Jazz Festival gave us a treat and brought over three experimental artists from Italy. They looked very excited to play in front of a new audience and see if we would accept their unique style of Jazz compositions. First up was a young lady named Rosa Brunello. She walked on quietly and pick up her Bass and began a solo. My first thought was how was Rosa going to wow us with an upright bass? She started slowly and began to nurture the many ways to pull sounds out of this instrument. Beside the plucking and the slapping (insert Rush joke here), she used the wood on the bass as well as the fret. She began a dance that seemed to form a symbiotic relationship. She then added some pre-recorded electronic sound and background noise that enhanced the experience to a story telling level. She also added jingle bells to her ankles and wrist to keep this enchantment growing. She took us through a dark ride into a mystical place that wavered and flickered inside different depths of you usual emotional psyche. Once the ride was coming to an end she let you glide down with a new sense of enlightenment. Well Rosa certainly blew off my skepticism of the bass being a fairly boring instrument.

Here are a couple pics from Rosa Brunello’s performance:

After a short break, we were introduced to a duo that called themselves, O-Jana.  I was told this loosely translate into Witch. Well that is the purpose of Alessandra Bossa and Ludovica Manzo. It seemed that the two of them began with a conjuring that led the audience into a hypnotic state. Think of an unknown forest and all you can hear are eerie sounds as you stroll deeper into the unknown. This was the journey they were leading us to. There were moments of erratic energy that drew you even deeper. With that energy you can see the mad scientist Alesandra using some pretty crazy moves around her piano. It was like watching Dances with Pianos…

Ludovica used her incredible voice to new heights where it no longer sounded human, sometime animal, sometimes an instrument and sometimes you just didn’t know. It gave her power a sense of surrealism as her modulation opened new dimensions and pathways for you to discover. There were moments were you can hear some channels of Kate Bush, but with a more subtle and controlled method.

These two ladies showed us many ways of creation with one movement. You had the very controlled idealisms of creating new sounds and then go into free improvisation and still can come back with beautiful soundscapes that enhance our emotional fortitude.

Here are a few images from O-Jana’s performance:

I hope these artist enjoyed being in Canada and tasting our flavor of music. I hope they make their way back one day with more exciting and mind bending designs.

To learn more about Rosa Brunello go to…  http://www.rosabrunello.com/