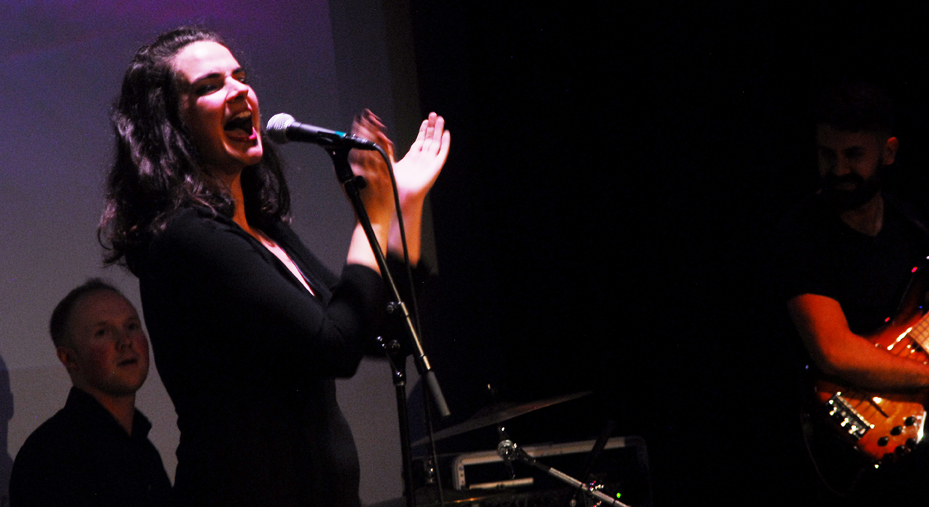 Well the Estonian Festival is underway and it began with a sold out show at The Artscape Sandbox in downtown Toronto. The theatre is a little stark but the sound quality was superb. The festival had a wonderful sense of class with the Estonian community showing up all dress up and hoping for a classy affair. With drink tickets and Estonian cookies and other tasty treats being served, how could you go wrong? There was a young lady from Montreal up on stage singing her versions of some older classic tunes like, Frankie Valli’s, Can’t take my eyes off of you”. Her name is Mari Sild and she has that kind of voice that could carry you away on a cloud. I really enjoyed her phrasing, because it reminded me of one of my favourite singers, Byran Ferry.  The band seemed to grasp a wonderful concoction of Pop, Rock and Jazz in a nice fanciful way. There was one thing you could not stop staring at, and it was the drummer Pedro Osorio. His intensity almost seemed over the top, but he held the reigns just enough to elevate what could have been just another performance, and brought in a stronger force that added a new dimension to the entire production. As the show grew deeper, it seems Mari continued to introduce some depressing themes. There was a string of depressing songs, but as she joked this was the Estonian way.

Here are a few images from Mari Sild’s performance:

After a fifteen minute stretch Jayme the MC, introduced the next act. Her name is Kaili Kinnon. She seemed to invoke a wonderful hush over the crowd, because as I was informed she has a very unique voice. Well that was easily proven from the moment she opened her mouth. There was a slow strong smokiness to her sound. If her voice had a flavor it would be mesquite. Her strength was having complete control over every note that she sang. It was methodical and disciplined. Throughout her performance she encouraged the audience to do a little sing along with her. The audience tried in their very quiet way, but still had fun trying. My guess is when you hear Kaili’s voice; it could be a little intimidating to sing along with her. Her songs were lovely and easily memorable. She sang a song called, “Be so Sweet” which easily could be a single and have charting success. It reminds me of another song that is driving me crazy, but I will have to break out my old Motown music and find that song. Anyway, I found myself getting deeply engrained with every song she sang, and I didn’t want her to leave. It seemed the audience felt the same way, because they called her on for one more. After she left, I needed to go review another show, but I did stop to buy her EP and have her sign it. Now I can reminisce to this talented singer, who will grace another review or interview here on this page.

Here are some images from Kaili Kinnon’s performance:

This music was possible because of … www.estonianmusicweek.ca

Get music by Kaili Kinnon at http://kailikinnon.com/