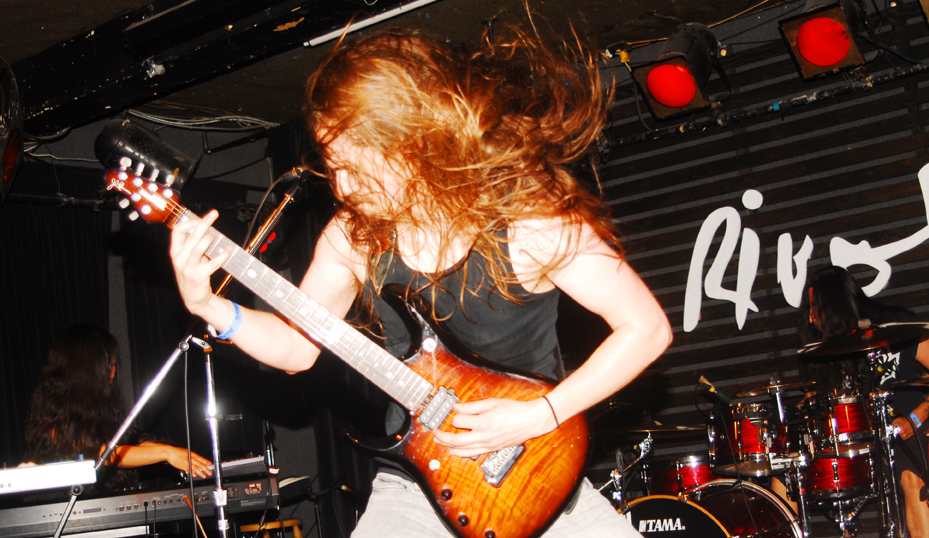 Hey Toronto, this is why I am here, to open your ears and eyes to the heartbeat going on in our awesome city. I was speaking with Serge Talainsky, promoter of Stark Applause. I was invited out to a show with three different progressive metal bands, which you will read about in a few moments. Stark Applause is taking a wide approach to open up new veins of musical blood and blend them to explore new strains of musical growth. Yes, Serge is a bit of a mad scientist. His way of cross pollination, is to find unique bands and bill them with other original sounding groups. The hope is to inspire bands to incorporate new streams of consciousness, while challenging audiences with these new experiences. Let this be the premise for Toronto to step up and reach new heights in its musical conductor. This should be the moment you start going out and filling your soul with this new movement.

The opening band started off strong with opening sounds of a lift-off to space. Yes they were going to take us on a trip. This trip was provided by a band called Prismind. They are true Metal Prog Musicians, especially when you have a title like, “Slaves in the War Machine”. They have an attitude of driving a Bullet train over your legs, yet you still have the stamina to bang your head.

The drummer, Mike Harshaw, kept this spaceship flying fast with his Captain Picard style and precision. The Singer, John Mamone, worked up quite a passionate sweat that would rival Hulk Hogan in a Battle Royale.  The guitarist, Kelly Kereliuk, could out-shred even Edward Scissorhands on his best days.  Then there is Justin Faraghar on Bass, who looked like a spider closing in on its prey and loving it.

A couple of songs worth mentioning were, “Our broken fate”, that were a real egg beater that you could find on just about any Dream Theater out there. Another one was, “Palace of the Mighty/The High”. This was their anthem and they were waving that flag high in the air. What I found fascinating, and what I enjoyed about Prismind is they were taking a large introspective at our humanity as well as our world. I hope they continue down this path. I can’t wait to see what they come up with next.

View images from Prismind’s performance below:

The next band up was Slyde. I could tell by the audience, most everybody was there for them. They came out and immediately you could tell this was a high flying fun-loving band. The lead guitarist/Singer was full of beans and reminded me of a young Ted Nugent without the guns. There were moments you could see he was concerned that his hair was going to get mixed up in his guitar strings. This man knows how to throw his hair around!

Their sound had some great Prog elements to it, but just sat on the edge of Hard Rock and Heavy Metal. Not that there is anything wrong with that.  The song of the night was their anthem, “Take us away”. It clearly was a devoted fan favourite and left the crowd wanting some more. So they rocked out a little more and left the audience with one hell of a sonic ending.

View images from Slyde’s performance below:

The final band on was Driftglass.  They opened up with a little tune called,’Down in the Dirt”. This where you find yourself in some crappy shit and there is no one to help you back up. Does this sound familiar? This track was sung by a man who resembled a bloated Paul Stanley who made love to Keanu Reeves, or was it an Eddie Vedder who was left in a horrible Foster home for too many years. Unfortunately, the rest of the band didn’t help as they looked very dead on stage. Oh and by the way, I overheard many people saying, “Why doesn’t the drummer put his shirt on”?

They did put out a big wall of sound, but it seemed to keep pushing you. They added outside accents to keep things together and interesting, but it wasn’t just enough.

View images from Driftglass’ performance below:

Overall, it was a really solid evening of discovering new music. I believe Serge from Stark Applause has a great idea to build a great musical audience for Toronto. I can’t wait to see who he invites next. Stay Tuned, same Stark time, same Stark Channel…

To slip into more Slyde go to… http://www.slyde.ca/

To figure out Driftglass go to… http://www.driftglass.net/

The great Rivoli should be checked out by you, go to… http://www.rivoli.ca/

To see who Dr Serge Frankenstein is putting together next go to… https://www.facebook.com/starkapplause/

← The Minotaurs, Soars…
Food for the Soul →