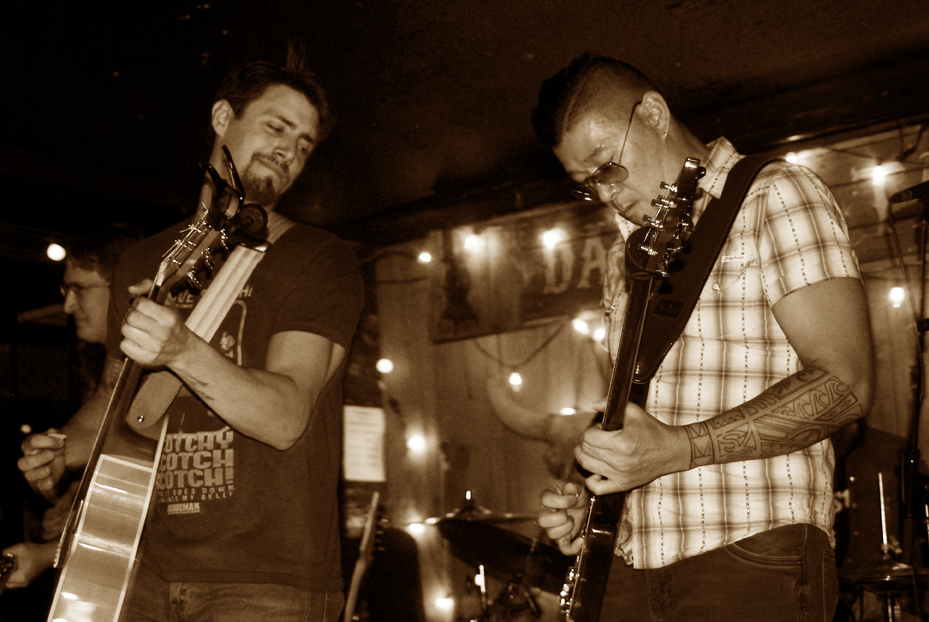 After hearing some Estonian Music, I thought what about some Country to balance that out. Well I did not have to go far. I just headed to one of the finest Country watering holes, The Dakota Tavern. Good Timing too, the band David Boyd Janes was just about to start, and what a start, the band threw back a shooter and was ready to show us a good time. With the opening number, “Get ready for a good time”, I knew I chose well tonight. That dance floor was packed with fun flirty females and beer swilling dudes. This is a ripe combination for a good time. The band felt the same way, because they kept their high octane music going, song after song. There were no ballads to be seen. The band was proud to announce this was the first time they played the Dakota and have put it on their bucket list. Well check that one off! They were about to wrap up their set with a splintering rendition of Hometown Crowd. The opening notes hit me like a ton of bricks, the opening chords were Kashmir from Led Zeppelin and then they blistered into their song. They blew the crowds mind. I believe the Dakota should have these guys back as often as possible.

Here are a few images from David Boyd Janes’ performance:

Now that is a hard act to follow, and by judging the body language of our next performer, Rebekah Stevens, she looked a little worried. A tiny gem from Kitchener, she slipped in some sweet tunes. Her voice was as cute as she was. Her confidence gained momentum as the crowd warmed up to this sprite. Her songs had an innocence to it with the openness to gain new experience to tell great stories. She just put out her new single, “Liar Liar”, which is getting attention on many streaming services. She had a lot of fun as she dedicated her last song to all the dirtbags in the audience. By the way this is also Rebekah’s first time playing the Dakota as well. Wow two in one night.

Here are a few images from Rebekah Stevens’ performance:

I was told to stick around for the next act, Matt Morson. I watched him set up as he parodied Lemmy from Moterhead. I was the only one who got it and we shared a quick laugh together. He quickly came on with all guns blazing and a roomful of people ready to get down and dirty. The atmosphere was swirling with an audience making friends with each other and making sure everyone had a drink in hand. Well we missed one person, Matt Morson. He was hot and parched hoping someone would bring over a beer. That happened on the second last song. Matt claimed he is a product of the country and came from, BUTT-F@$K nowhere. I looked it up and couldn’t find it on Google Maps. As it turns out this was the first time Matt has ever played the Dakota, talk about your Canadian Hat Trick! Matt has a solid blend of mixing old school country with a modern sound. He finished his set with, “Down by the river”. I certainly hope he didn’t bump into a van while he was there-(SNL Fans will get it…).

Here are a few images from Matt Morson’s performance:

Overall, it was an evening full of fun and a place to easily make friends. It seems everyone is open to talk and make good friends. Even the bands stuck around to have a good time, and why not when you are kicking back at the Dakota Tavern.

Check out this award winning band…https://www.davidboydjanes.com/

If you have no arms or legs and like to lie in front of the door, you must check out another Matt… http://mattmorson.com/