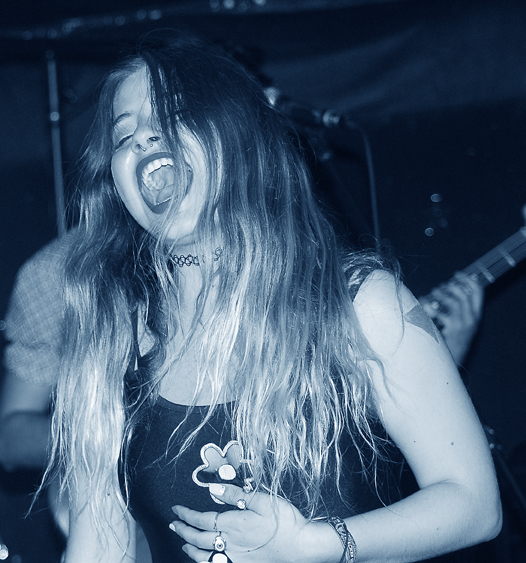 If you have never been to a Ginger Ale and the Monowhales concert before, you have not had the chance to have been in a mosh pit amongst other high energy Pop fans before. Let’s just say the 4 foot 10 ½ inch singer Sally Shaar, let’s you know who controls the room. She starts the room off with some sensible high energy Pop songs , like Too Late and Pockets, but once she sees the opportunity to throw things into high gear, the room explodes to the song Blue Balls!

There are balloons, floating devices, an inflatable whale (HaHa) tossed into the crowd to get this party started! I think I may have seen something similar at a Flaming Lips concert. This doesn’t really matter. What matters, is the audience is vibing off of the bands energy and there seems to be a beautiful dance that doesn’t stop until the end of the show.

I have been to many Metal shows and have seen many mosh pits, but this is the first time I have seen it at a high energy Bouncy Castle kind of show. They delivered there new single White Walls with awesome enthusiasm, and finished with two other high octane numbers. Ginger Ale and the Monowhales is a band that needs to be checked out if you live a boring existence. They will wake up you spirit and give you something to look forward to the next day.

Tom Waits for a spiritual experience →