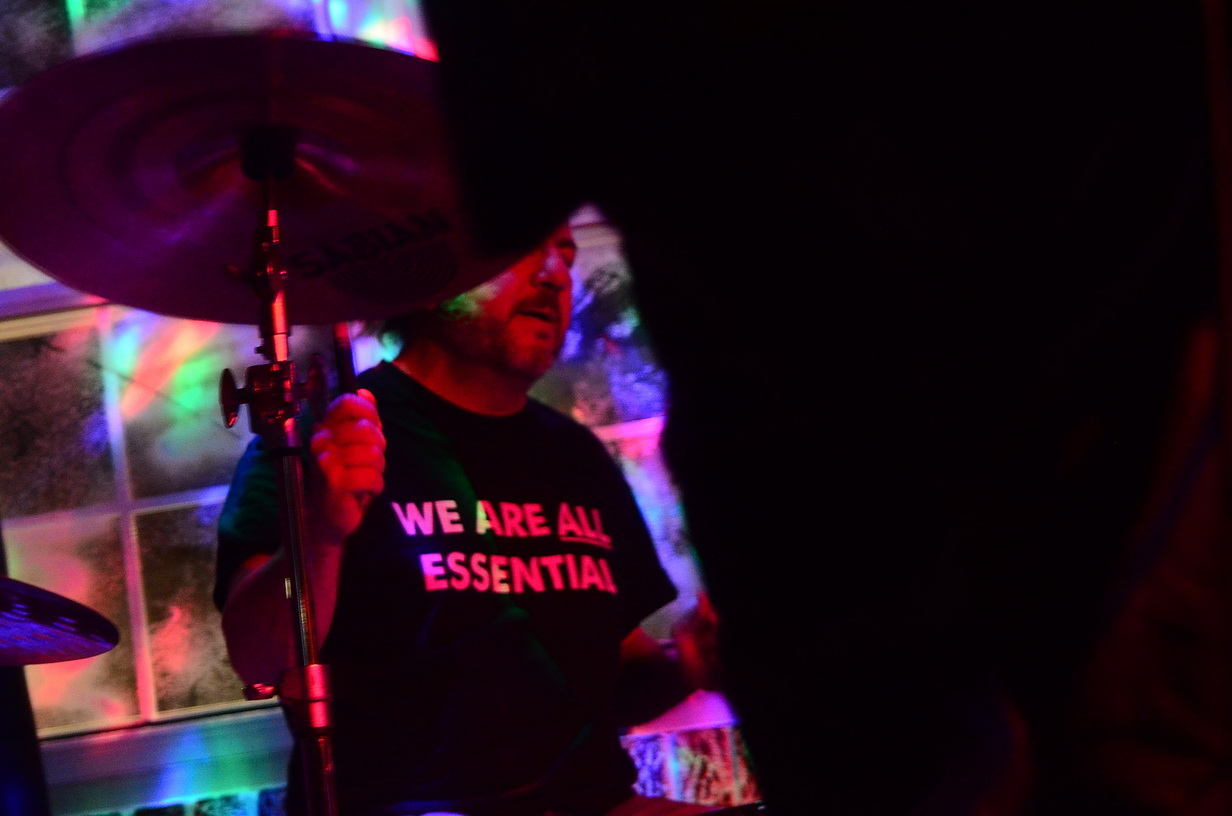 I arrived at the Hard luck bar, only to find it closed down due to Covid, again. I left feeling like I should just go home, but I drove to Sea Scape, because there were bands playing there. Alas, they were shut down too. Now I began to wander the street like some pathetic version of Ally McBeal at the end of one of her shows, looking all forlorn and slightly disheveled. I decided to give one more kick at the can and go to Tail of the Junction. If they closed down, at least it was on my way home.

To my surprise, I heard noise, joyous raucous noise. I peeked my head in and heard some wonderfully ugly sounds. It was a live band! Before you could say “Covid killed the radio star”, I made my way in and positioned myself to shoot some live music. The band was Strawman. They were raw, slightly unrehearsed and had an odd secret weapon: Duffy, the drummer. When I began shooting I noticed the drummer Duffy taking off his shirt and playing topless for the rest of the set. That is not too unusual for a Neanderthal drummer to do that, but he does show up later in the night.  In fact he seemed quite comfortable with his topless self. They played a handful of original tune and did a medley of 80’s pop songs. The last song, “Dirty work”, was a great tune to finish off their set.

Here are some images of Strawman:

After a quick change, a band that has been around for 7 years got up on stage and played for the first time in 2 years.  This well oiled machine is named, Uforia. That is exactly what you felt from the opening riff. These guys are super charged dynamos that continue to hit you with memorable and immediate riff oriented hard rock that hits you in the face and seeped down to your toes. I got stuck to one side of the stage, but it was the right side. The bass player who has a strange resemblance to Keanu Reeves with Pippi Longstockings hair and some fancy footwork as he held the sound together with some low end monstrous noise. The singer was quite the front man with his guitar work and great facial expressions. Between them and the rowdy fans up front, it was a beautiful reunion as their infectious energy was making new fans very quickly.

Here are some images of Uforia:

Finally, No Sunshine collective went up, and I realize that the two front men had to be brothers and the bass player is also in another great Toronto band, Pink Leather Jackets. If you are going to moonlight this is the Rock and Roll way to do it. There punk style was of course straight forward, but not vicious or malicious. It was about everyday observations. With songs like, “Old Radio”, “Breathing Again”, and Sink or Swim”, it was obvious that they are looking at like from a casual window and just crank the volume on these ideas. “Coffee and Cigs” is self-explanatory, but I am still trying to figure out the metaphysical meaning behind, “Dish Soap”.

I am not sure how long this band has been together, but they are not going away soon. If the bass player wants to pull a James Brown move and become the hardest working man in show business, he should get No Sunshine Collective and have them opening for Pink Leather Jackets. That would be something I would pay for, heck I will even become his water boy.

Here are some images of No Sunshine Collective:

Oh back to Duffy. During the last set, he began to share his passion for music and tried to start a mosh pit with one other person. He eventually got right into it and removed his shirt and tried to proceed to continue with his assault. You could hear throughout the noise for him to put his shirt back on. So if you want to have a half naked ape man jumping around your show to add that spice, I am sure Duffy has a business card for such an occasion.

See what else is playing at the Tail of the Junction, which seemingly also goes by the name Living Colour at…

Get more info on No Sunshine Collective…

Check out Uforia at…

Strawman can be read about here. https://www.facebook.com/strawmanmusictoronto

And for your enjoyment, Duffy: