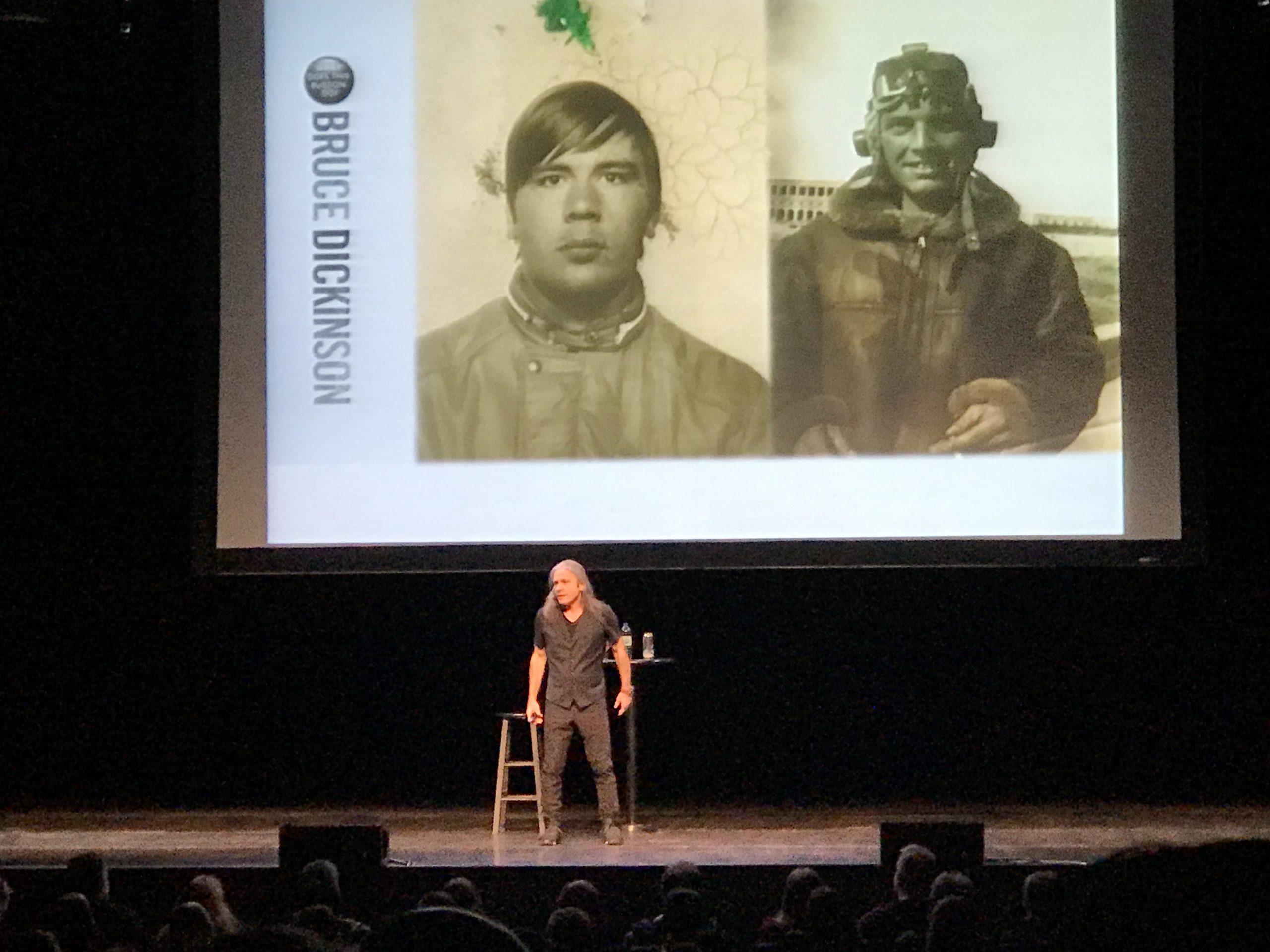 Yes, fear of the duck. That is one of dozens of anecdotes Bruce Dickinson, from Iron Maiden charmed us with as he spoke of his life growing up all the way until today. He packed Queen Elizabeth Theatre with tons of Maiden fans ravenous to hear stories told about this Metal God and what makes him the King of the hill. Of course we all came running (Maiden Joke) to find out. He started out with three drinks on a table and asked which one will he drink and which one would be close to water. He had water, Coors light, and The Trooper, Iron Maidens own brew. I need not spill the beans on the final outcome.

Bruce’s early childhood was in Worksop England and he swears there is not another Worksop town anywhere on the planet. He told us the hardships of growing up and how he is not the kind of person to fit in just to fit in. In other words, he was in trouble a lot. His excuse for this was,” My tongue is my undoing”. I can relate.

He went onto University and that is where he would enter into a world of music and weed. He first was in a band that had a lot of comedy and theatre built in, he then went to become the singer in Sampson. Every mistake you can make in your first marriage, they made in their band over the course of two years. After the manager took away all their privileges, they used their road manger to get them around from gig to gig. They stopped at a gun shop in the middle of nowhere in Northern Scotland, and that is when Bruce bought a large decoy of a Canadian goose and attached it to the roof of the car. If you have anatidaephobia you would have stayed away from this band. It happens to be a fear of ducks that may be watching you. Yes, Fear of the Duck: Maiden fans, you’re welcome.

Right after Sampson broke up Bruce was asked to join Iron Maiden and that is when Bruce’s taste in clothing went out of the window. Bruce went into a garrulous explanation of his fashion decisions. There were many photos to prove how many bad choices Bruce made over the years. He is the kind of guy that will never stroll down the catwalk.

There were stories about his passion for fencing. If he focused all his energy into fencing he may have gone on to the Olympics for England. That is the kind of guy Bruce is, when he gets a focus he will make it happen. Metal fans were happy to know that Bruce made other decisions.

His other passion is being a pilot. We all know he became a commercial air pilot. When Bruce left Iron Maiden, he not only went for a solo career, but he really did work as a commercial pilot for an airline company. Other quick stories involved his envy towards Steve Harris’ perfect legs, meeting the Queen and knowing she always had the last laugh. He even had a selfie with a tank; unbeknownst to him, the last guy to do this had been shot.

Bruce went and talked about his throat cancer and how he dealt with it. When speaking with his doctor his light bulb went off and he dealt with the cancer in a mature and strong manner. He still had some funny stories about his chemo. He grew a beard and went into chemo and his beard became a hilarious part of his recovery, as clumps of beard kept falling into his food and beer.

Bruce took a break and came back and did an hours’ worth of questions and answers. He was asked when he was going to retire. There was a resounding No that filled the auditorium. When are you ever going to play Alexander the Great? The answer was priceless.

The highlight of the evening was his story about how he and his friend got stranded at a tiny airport and had to call his drummer Nicko McBrain to come and get him. Nicko had a license to fly a plane, but still needed an instructor to fly. So Nicko got the instructor and flew to get Bruce and his friend, in a crazy storm, in a tiny plane that barely holds four people, never mind the luggage. This particular plane had the option of having 4 different sized engines. This one had the smallest engine, a 140 Cherokee engine, not much power. There was falling off a cliff, all four leaning forward a lot and trying to get higher to reach the landing strip. All this, and the instructor was reading the instruction manual to get the plane to work.

I won’t go on any longer because you will have to buy Bruce’s new book, “What does this button do?”. This is the reason he was in town. I enjoyed the fact that he did not flog the book down our throats. He just came on and had a good time with Toronto. This is the kind of guy I would buy a book from, no cheesy sales pitch to make an extra dollar. I tip my hat off to you Bruce for being the best Heavy Metal Frontman ever and doing it your way. A very inspirational talk with a guy who allows you to make your own decisions, and believe me, even though we are all connected because of him, everyone in that audience thinks for themselves.

Now this would make a great holiday gift for the Metalhead in your family or friends circle. All I have to say is UP the  Irons!

Here are some images of Bruce Dickinson:

Other images provided by Internet.

← The Phantom of the Iron Kingdom
Class Acts on College →