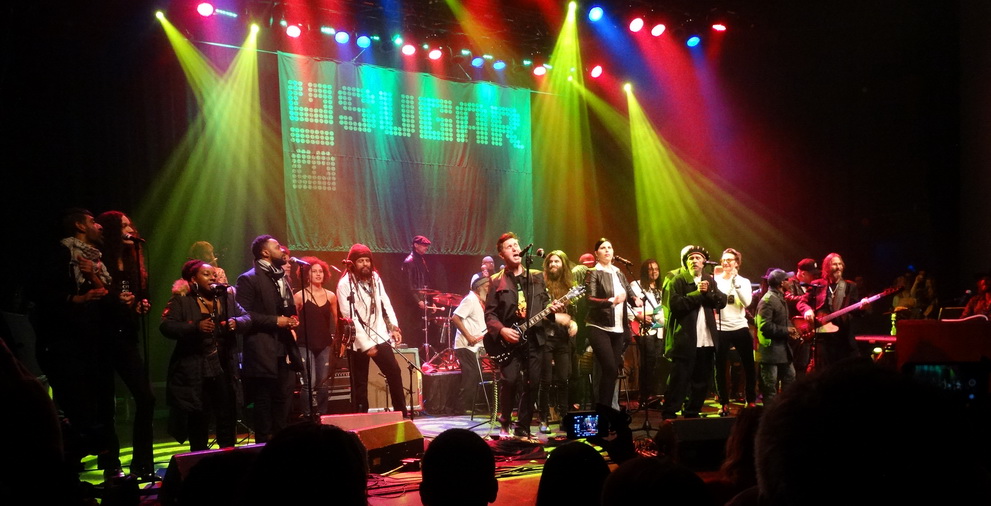 Hemi-vision is the third recording by Big Sugar and was released on September 11, 1996. Gordie Johnson had been a staple in the music club scene for many years and made a lot of friends along the way including Molly Johnson, who helped get Big Sugar with securing a record deal.

Hemi-vision is a hard rocking album with many complex elements that give this record a ton of character. There are the Rock elements as well as Blues, Pop, Alternative, Reggae and some psychedelica and Dub. The sound is full of confidence and swagger in its swampiness and side order of grease. The kind of grease you need after a night of debauchery. Each song finds its own unique groove and explores it while it waves it in your face as if it is taunting you to get up and sway with it.

The first three songs were the singles from this album, “Digging a Hole”, “Gone for Good”, and “If I had my Way”. This made for some solid sales for this record as it went Platinum in Canada. Gordie and the boys, Garry Lowe on Bass, Paul Brennan on drums and Kelly Hoppe on Sax, harmonica and keyboards filled out this already full sounding Record. It was like going to a Thanksgiving Dinner knowing full well that you are going to eat well, but always overdo it and you can’t button up your pants again. This is that record.

The sound is fat enough so you will never starve.

The sound is fuzzy enough that your tongue is in constant need of fluids.

The sound is groovy enough to keep you hypnotized long enough to add layers of haze to your evening.

The sound is swagger enough to make you walk a crooked smile.

The sound is smoky enough to you can’t see the other side of the room.

The energy is loud enough that you will have to buy new speakers every time you listen to this record.

I recently read they will be releasing a 25th Anniversary celebration of this great record. If you don’t own the original, make sure you grab the Anniversary edition.

The evidence is not necessarily in this little write up, but in listening and taking the trip yourself. It will be quite the trip.

Here are some images of Big Sugar:

Do you any favourite memories from this album. Please put them in the comment section below. If you agree with this story, please hit LIKE on my Facebook page… https://www.facebook.com/blasttoronto/