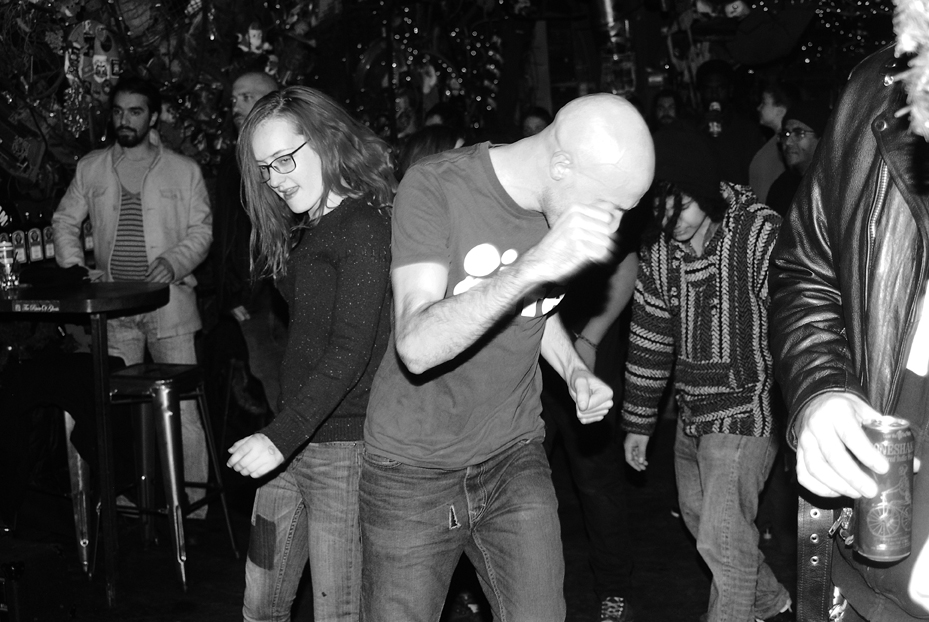 Artificial Dissemination invited their punk rock buddies to play with them and celebrate their new CD , Past Present Future. It is a collection of their past stuff, new material and interviews from various radio stations. With song titles like,”Walt Disney was a Nazi”,” I liked you better when U were dead”, and “Papparazzi stole my soul”, this CD is worth buying on those song titles alone.

The Residuos were the first band on for the evening. Immediately you realize they are singing in Spanish. These guys are so fun they should be called Spanish Fly! The music has a fun danceable quality to it. If you can imagine a band that plays Salsa Punk you will be very close to understanding their sound. They evened used music sheets to play their songs from. Very  Unusual. If Sepultura ever needed a band to play at their Christmas party, The Residuos would be the perfect fit.

View images from the Residuos performance below:

Next up was Caustic Lime. This a great name for this band, because before I learned their name, the first thing I thought about this band was how heavy and caustic they sounded. Their way of playing is very unorthodox. It feels like a bullet train riddled with rough bullets. They can become very guttural at times and the singer has some of the best spastic energy I have seen in a long time. Their bizarre compositions will keep you guessing. These guys will keep you on your toes and bashing your head against a cement wall.

View images from the Caustic Lime performance below:

Kill Sid was up next, and what can I say but you are hit with a wall of noise, a sonic tsunami. The members all have their own personality and look. The guitarist was a classic long haired Metalhead. The singer was brash and bald. The bass player carried his Lumbersexualism with him at all times and the drummer was Portuguese. WHAT that’s all I had on him. Their version of freight train rock hits you between the eyes and don’t stop to say sorry.  The highlight of the evening was their version of Motorhead’s tribute song called, “Ramones”. They also did a killer instrumental that would Make Black Sabbath fans.

View images from the Kill Sid performance below:

We finally got the main reason why everyone was gathered. Artificial Dissemination hit the stage with their high energy punk and piss attitude. It’s hard to believe this is a two piece band. Shawna T Heist on guitar and vocals, and Jamie Problem on Drums and lead vocals. These two love to come crashing through your skull and lick the remains of your brain on the floor. They did a great superhero song called “U.R.R.Superhero”. They kept it very intense and solid. They got a good mosh pit going, where the devotees showed their love for this band. They even threw in a Christmas song to make the evening festive and special. The Bovine Sex Club was a very happy place this past Tuesday.

View images from the Artificial Dissemination CD Launch performance below:

To see where they are playing next go to http://artificial-dissemination.com/

For other shows at The Bovine Sex Club go to http://www.bovinesexclub.com/website/home.php