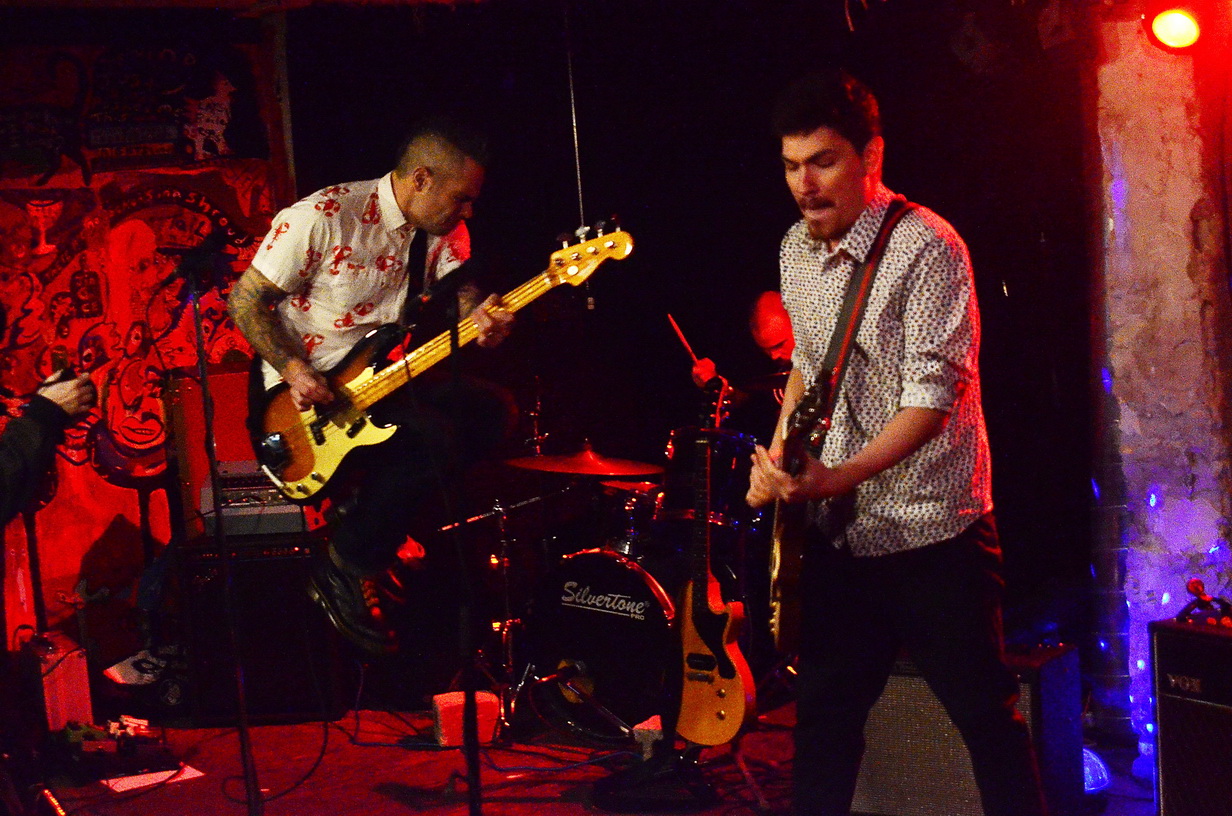 Tail of the Junction saw 4 bands play to a music starved crowd. The place was packed and the punk was in your face.  First up to bat was Black Budget and they came out swinging and not in that fun dancing style. I am talking Pure Punk Mode! What helped make this night an event was a painter named Joseph. He took a painting and continued to finish it live on stage with Black Budget. He thrashed around as his hands were in a trance and clearly he had no idea of how this was going to end. Joseph painted to the energy of the music. The band thrashed its way around like the classic punk rockers you expect to see. They even did their version of a Foo Fighters song. When they asked the crowd, “Do you want to Dance”, they threw themselves into a wall of noise that would have made Lemmy from Motorhead proud. After that set I talked with Joseph and he let me know this is the first time he even attempted this live painting ritual. Off the top of his head he called his new piece, “Stage Disaster”.

Here are some images of Black Budget:

Hot Apollo hit the stage next. Now mind you I have seen this band a couple of time before and their stage presence today has grown by leaps and bounds. Jaymes took front man to a level I have never seen in him before. His energy was through the roof as he embodied the like of Iggy pop, David Bowie and John Lydon from the Sex Pistols. The trash they presented was gutter street glam. The guitar player looked like he was kicked out of Ozyy Osbourne’s band because he could keep up with Ozzy during his drinking binges. Another way of describing this band is they put on the trashiest 20 minute workout ever. Maybe this is why Jaymes stay so thin, his stage energy works off all the calories he has consumed that day. His moves were erratic, jerky and downright rubbery. This is the kind of frontman you want to see at larger shows.

Here are some images of Hot Apollo:

The Mendozaz got up and was greeted very warmly by the crowd. When the singer opened his mouth, that punk sneer fell away and I was surprised by his Florida wine voice. It threw me off but it did work for their sound. It was hard not to notice the Bass player Mike, as he took up every possible punk rock stance possible and leapt around at all the right moments. The drummer was solid and truly looked like he was having fun. They even got the crowd to engage into the fine art of moshing and charmed the crowd with their cool song called, “Dapper Man”. The singer even shared his insecurities with us as he ranted about how he feels every man should be gay. This way he has better odds to score some chicks. Another great Motorhead-like moment came when they finished off with their song called, “Murder”.

Here are some images of The Mendozaz:

Just when you thought this was a great evening, one more band arrived that was not on the roster, but I sensed they really wanted to play, they were called Loud Almighty! Unlike the young bands that just played these guys were veterans and were going to prove their worth to this young crowd. They started off with Old School punk and by the time they hit their 3rd song, they got into their groove. They began to slip into other styles of music like Punk Country, Rockabilly and did a bunch of great covers for the second half of their set. Songs like, “Little Sister”, “Not fade away”, and “Ballroom Blitz”. The singer projected his persona as the Bipolar hero of Rocka Rolla. Loud Almighty finished their set with Tom Jones, “She’s a Lady”, and “Rock and Roll” by Zep.

Here are some images of Loud Almighty:

Save Toronto Music Venues are hard at work bringing these shows back into our hardened-hearted community, so make sure you follow them on Instagram and support them so they can bring us the joys of trashy living.

← Sandra Bouza – Falling away from me
Smell the Tale →

7 Responses to A Lot of Tales at the Junction