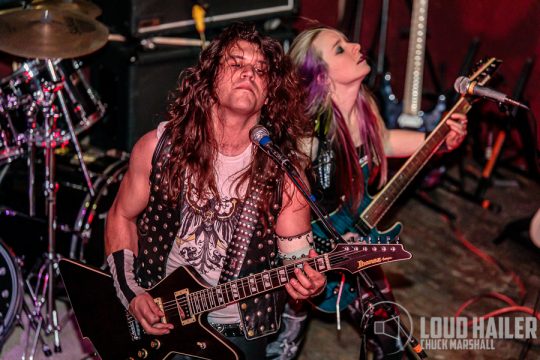 Back in November 2019 I had the invitation to see Iron Kingdom and write a concert review. I did not know that I was to be transported back to my teenage hood. Iron Kingdom embodied the essence of what was great Heavy Metal coming into the Eighties all about. The songs were all original and the sound reeked of Judas Priest, Iron Maiden, Dio, Saxon, amongst other greats from that time period. For us rusting Metalheads, this is just the oil we need to jump back into the Thrashing business again and Rock out from 40 years ago. I will now let you enter into The Iron Kingdom…

Inspired by legendary pillars of heavy metal such as Iron Maiden, Judas Priest, The Scorpions, and Rush, this four-piece is well known for their energetic and electrifying stage presence, as well as intricate musical melodies that bring listeners back to a time when heavy metal was in its prime.

2. Your musical influences growing up: Deep Purple, AC/DC, Van Halen, Metallica, and the Scorpions, took a couple more years before finding bands like Iron Maiden and Saxon, but man was that a fun journey( Blast simple says-SAXON!!!)

4. Why did you choose the musical path: There wasn’t much of a choice to be made, this was the most awesome music we could find so we wanted to make more of it. (Blast say- Keep those Wheels of Steel Rolling…)

5. What are you listening to right now: I’ve been listening to a bunch of Riot albums today, mostly ‘Thundersteel’ and ‘Through The Storm’

6. Where do you see yourselves 5 years from now: Well, I guess that’ll depend on how COVID-19 progresses, however hopefully we’ll have released 3 more albums and be successfully touring somewhere in Europe or South America once again!

7. What is your favourite place to play: There are too many killer places to play, it’s hard to choose just one, but If I had to choose I’d say somewhere in Germany, maybe Hamburg. Honourable mentions go to Dawson City, YT, Worcester, MA, Gdansk, PL, and pretty much anywhere in Brazil.

8. During this last Year, how have you been growing creatively: Since we couldn’t play shows, we’ve been focusing our attention towards writing music. In-fact we’re currently in the pre-production stages of our 5th album. Definitely excited to share what we’ve come up with, especially since we have Max Friesen on the drums now (he joined us back around May of 2020). So, yea, lots of new stuff in the works!

9. Where do you draw your inspiration from: This new album in particular draws a lot of inspiration from some different book series such as Elric of Melniborne as well as the Wheel Of Time, but then again it also draws on some ancient religious beliefs, and tons of other stuff, so ya I’d say whatever we find interesting at the time is what we are inspired by.

10. What is the message you want to give to your audience: That Heavy Metal is the Law!!

11. If you could, what Toronto venue do you want to play in: I think the Opera House would be a rad venue to play someday.

12. Who would you love opening for: Saxon or Helloween would be pretty killer, but Iron Maiden or Judas Priest would be unreal

13. Best or worst performance you had: Best would probably be playing KEEP IT TRUE XVII in Germany, we played to a sea of 2500 dedicated traditional metalheads from around the world, and even though I actually had strep throat at the time and was on anti-biotics, nothing could bring us down from that fantastic experience. Hopefully someday we’ll get to do some more gigs like that down the road.

14. What instruments do you own I’ve got a bunch of guitars, mostly play my 2 customized Fender Stats, but I also have a Gibson Flying V, Gibson Explorer, and an Ibanez Destroyer. For my amps I play a Marshall stack, with a JVM410 head.

15. Are you recording in a studio, if Yes which one? Currently we’ve built our own studio to save on costs, so ya just our own space

16. What advice would you give to another similar musician Do this because it’s awesome, you’ll experience some rad moments along the way, but just remember that Music, in the end, isn’t about the money or the fame, it’s about the journey and the joy you’ll bring to others.(Blast agrees)

17. Who was a favourite musician you got to play with: Hmm.. I’d say Hammerfall

18. Who would you love to work with if you could: Roger Glover as a producer

19. Musically, what album is your guilty pleasure: Supertramp – Crime of the Century( Blast say- For Metalheads, yes Guilty, for Blast, Not Guilty)

Blast side note- I usually ask the artist more than 20 questions and we edit it down to 20, but in this case these answer were so amazing we extended our rules and kept 21 questions in for this interview. Blast Rules!

Let’s finish off with the lovable and shameless plug I give the band at the end of these 20 questions. You read about them, now let’s put the proof in the molten pudding!